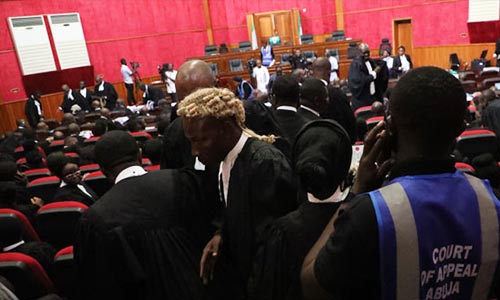 The presidential petition tribunal on Thursday continued sitting in Abuja but a mild drama played out as two different lawyers announced appearance for the Hope Democratic Party (HDP).

A factional leader of the party, Mr Roland Tambra who says he is the national chairman of the party told the tribunal that Mr Eyo is not his counsel.

Eyo in countering the argument asked the court to take judicial notice that both Mr Roland and his lawyers never filed any process before the court that they are only imposters whose actions have been reported to the police.

Chairman of the tribunal Muhammed Garba then asked Mr Eseigbe if he had filed any motion before the court.

Mr Esieegbe in response said he had not filed anything because the petitioner filed the petition without the consent of the party.

The tribunal then took note of other appearances in the case.

The chairman, Garba later concluded that the court received no notice of change of counsel. All the court has is the process of the first counsel.

Until the tribunal finds a notice of change of counsel the presumption is that the counsel who brought the petition is the one the court will pay attention to. It is not for the tribunal to decide for the party.