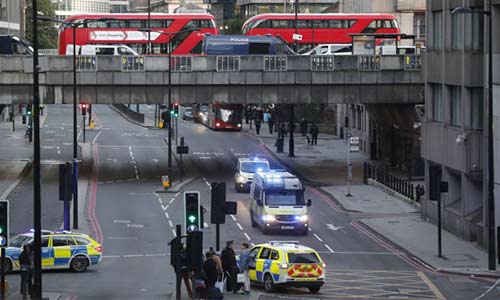 British police shot and killed a man suspected of going on a stabbing spree near London Bridge on Friday in what authorities called a “terrorist incident.” “We believe a number of people have been injured,” London’s Metropolitan Police said in a statement released on Twitter.

"Emergency services attended, including officers from the City of London Police and the Metropolitan Police.

A male suspect was shot by specialist armed officers from City of London Police and I can confirm that this suspect died at the scene."

“Due to the nature of the incident, we responded as if this was terrorist-related. I’m now in a position to confirm that it has been declared a terrorist incident,” Assistant Commissioner for Specialist Operations Neil Basu told reporters outside Scotland Yard. Basu said investigators believe a device strapped to the suspect’s body was a hoax explosive device.

Armed officers from the City of London Police shot and killed the suspect, who died at the scene, Basu said. Police officers in Britain generally do not carry guns.

London Mayor Sadiq Khan commended the “breathtaking heroism” of the members of the public “who literally ran towards danger” without knowing the device strapped to the suspect was a fake. “I want to say thank you to them on behalf of all Londoners,” Khan said.

“We must — and we will — stay resolute in our determination to stand strong and united in the face of terror,” Khan said in a statement on Twitter. “Those who seek to attack us and divide us will never succeed.”

Prime Minister Boris Johnson said “to the best of our knowledge the incident has been contained,” but he urged the public to remain vigilant. “One cannot help but think back to what happened in 2017 in the same part of the city,” Johnson said.

Eight people were killed in a terrorist attack on London Bridge in 2017 when three men in a white van ran over pedestrians on the bridge, then exited the van and began stabbing people in nearby Borough Market.

The London Ambulance Service on Friday declared a “major incident” at the bridge due to the multiple reported injuries. The number of injured people, and the severity of their injuries, remains unknown.

“All of a sudden we saw some police cars and then moments later heard two gunshots,” Einer Orn, who works near London Bridge, told BBC News. Orn said he heard “gunshots and people started to run off the bridge.”

The high-traffic bridge has been shut down as police investigate the incident.