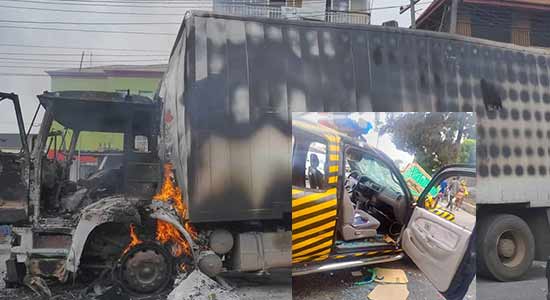 A TRUCK driver ran over several pupils in Ojodu area of Lagos State, around 2 pm on Tuesday, December 7.

Reports said the pupils were going home after school and wanted to cross the road when the hit-and-run truck driver ran over them.

According to an eyewitness account, immediately after the accident, the truck driver ran away but was caught at Ogba, close to Excellence Hotel, where the truck was set ablaze by angry passers-by.

Riot, however, broke out as a result of the incident as Police officers fired tear gas canisters to disperse the large crowd.

The actual number of casualties was not ascertained when filing this report.

Students who suffered injuries have been taken to nearby medical facilities.

The truck, which was laden with laundry detergents, Emergency services have reportedly arrived at the scene, although authorities have yet to issue a statement as to the cause of the fatal crash.