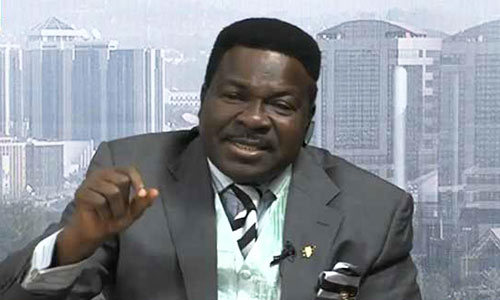 A Senior Advocate of Nigeria, Mr Mike Ozekhome, and the Economic and Financial Crimes Commission (EFCC) have disagreed over the claims that nobody was allowed access to a former Attorney General of the Federation (AGF) and Minister of Justice, Mr Mohammed Adoke.

This comes shortly after Mr Adoke returned to Nigeria from Dubai in company with INTERPOL officers aboard Emirates Airlines Flight 785.

The aircraft is said to have departed the Emirati commercial capital at about 8am Nigerian time and touched down at the Nnamdi Azikiwe International Airport in Abuja after about eight hours later.

Ozekhome, who is Adoke’s lawyer, alleged that neither he nor any other person was allowed to talk to the former AGF.

According to the senior advocate, his client was picked up at the foot of the aircraft by INTERPOL officers and taken to the international organisation’s office in Abuja.

Reacting to the allegation, the anti-graft agency told Channels Television that the claim of denying access to Adoke was not correct.

Mr Tony Amokeodo who the spokesman for the acting EFCC Chairman, Mr Ibrahim Magu, confirmed during an interview on Politics Today that the former AGF was already in the custody of the anti-graft agency.

He said, “That’s not correct; he (Ozekhome) is his (Adoke) lawyer. So, he has the right to say anything he wants to say.

“But the fact still remains that any detainee or suspect will be allowed to have access to his legal team.”

“We have him (Adoke) with us here and we are going to do some kind of question and answer session where he will be quizzed.

“He will have access to his lawyer. We have nothing to hide about the former AGF and what we are going to do will be within the ambit of the law,” Amokeodo assured.

The former AGF is facing charges bordering on alleged abuse of office and money laundering with respect to the granting of the Oil Prospecting License (OPL) 245 to Shell and ENI filed against him and four others by the EFCC on behalf of the Nigerian Government.