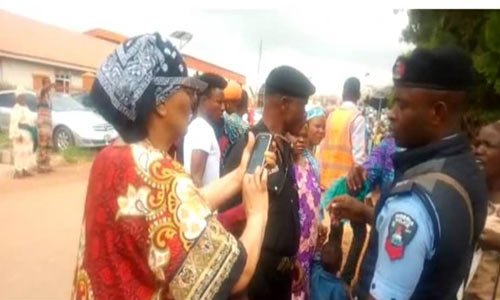 The Ondo State Police Command, on Thursday, said it had commenced investigation into the alleged assault on worshipers and the pastors of the Redeemed Christian Church of God by a judge of the Court of Appeal, Justice Folayemi Omoleye. The incident happened in Akure on Wednesday, The Punch’s reports.

The state Police Public Relations Officer, Mr Femi Joseph, who confirmed the incident, said the command had also interrogated the judge over the incident.

“We can confirm the incident; the DPO led a team to the scene and we have interrogated the judge. We have also commenced investigation into the matter,” he stated.

Justice Omoyele was alleged to have gone to the branch of the RCCG on the Ijapo Estate, Akure, on Wednesday and disrupted the service by recording the church’s ongoing service with her mobile phone.

Her action was said to have alarmed the church members, who challenged her for recording them, but the judge was alleged to have assaulted her challengers, including the pastors of the church.

She was said to have slapped a female worshipper and some pastors, who tried to stop her from further recording the church’s activities.

Before the incident, it was gathered that the judge had complained of disturbance caused by the noise coming from the church.

The judge’s house is said to be beside the church and she had complained that the noise from the place of worship constituted a nuisance to her, particularly whenever the church was having programmes.

It was gathered that the judge was irked that there had been no positive response to her complaints by the RCCG.

An eyewitness stated, “It was like a drama on Wednesday when the judge publicly assaulted members and pastors of the RCCG, injuring an aged woman in the process.

“She (Omoyele) came into the church and disrupted the ongoing divine encounter service by mischievously recording our programme with her phone.

“When she was asked to stop the act, out of anger, she slapped a 68-year-old woman and one of the pastors, who tried to advise her not to disrupt the church service.”

An assistant pastor in the church, Olatunde Awoyelu, confirmed the incident and described the judge’s action as strange and dishonourable by a very senior legal officer.

Confirming the incident, Pastor Idris Umar of the RCCG Region 22, Ondo, said the church had directed its lawyer to write a petition against the judge for her alleged dishonourable action of slapping the 68-year-old assistant pastor, Mrs Felicia Akindurojoye, and another parish pastor, Felix Solomon, during Wednesday’s divine encounter service.

“The woman was rushed to the Ondo State Specialists Hospital for treatment, while Solomon didn’t sustain any serious injury,” he said.

Umar said the petition would be forwarded to the National Judicial Council to investigate and punish Justice Omoleye.

Another source said it took the intervention of men of the Nigeria Police from the Ijapo Police Station to restrict the judge from further assualting members of the church.Efforts to reach Justice Omoyele on her telephone were unsuccessful as the line did not connect.