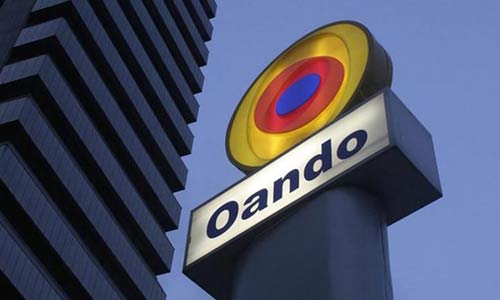 OANDO Plc may be on its way to regaining shareholders’ confidence after recording third consecutive profit, driven by a strong performance in its crude oil trading division and a 3 per cent increase in turnover to $312 million, up from $301 million.

The energy company had closed 2018 financial year with an N28.8billion profit for the year ended December 31, 2018, after coming out from years of loss position induced by huge dollar-denominated leverages.

Rising crude oil prices which surged above $66 per barrel in first quarter 2019, $3 higher than the year’s projected average, has boosted the financial outlook of the indigenous energy solutions provider.

An analysis of the company’s financial statement filed to the NSE last Friday showed that its crude oil trading division, Oando Trading, was a significant revenue driver with 11 per cent increase in earnings and a 3 per cent increase in total turnover to $312 million, up from $301 million.

The company has continued to increase its market share in the downstream sector through its trading business, with the result that turnover grew 12 per cent to N168 billion from N150.6 billion in Q1 2018.

To further improve net distributable earnings, the Group also reduced total leverage by 5 per cent to N200.9billion, down from N210.9 billion in 2018 while its long term borrowing decreased by 1 per cent to N75.8billion compared to N76.8 billion in 2018.

Commenting on the financial performance, Tinubu said: “Our results reflect the progress made over the last few quarters and provide an indication of our expectation for the year. Now that our debt profile is down by 78 per cent from $2.5billion as of December 2014 to $558million, and our de-leverage program is 90 per cent complete with most of our non-core operations divested for good value, we can now focus on steady growth in our upstream entity.”

After 2014 oil crash, Oando had embarked on the realignment of its business operations with a focus on strategic divestments, cost optimization, and debt reduction, with the expectation that a downturn in oil prices will not have an adverse effect on the company.

During the quarter under review, Oando had divested its 25 per cent residual interest in Axxela Limited to Helios Investment, a leading private equity firm with a focus on investments in Africa, signifying a complete divestment from its midstream business.

The total selling price for its 25 per cent interest was $41,500,000, creating real value from non-core business activity of the Group.

On the full divestment from Axxela, the Oando boss said: “The completion of this divestment reinforces Oando’s ability to create value that can be monetized and the Company’s status as the indigenous partner of choice for international companies looking to invest in Nigeria.

“This transaction favourably positions us to significantly reduce our debt profile and remain focused on growth through our dollar-denominated businesses. We will continue to maintain significant presence in the Midstream as well as grow our gas aspirations via our Upstream gas assets in our NAOC Joint Venture wherein we have four gas projects within the NNPC’s Seven Critical Gas Development Projects (CGDPs), which are responsible for almost 50 per cent of the 42 TCF that will be delivered by the seven CGDPs by 2020,” said the Oando boss in a statement.