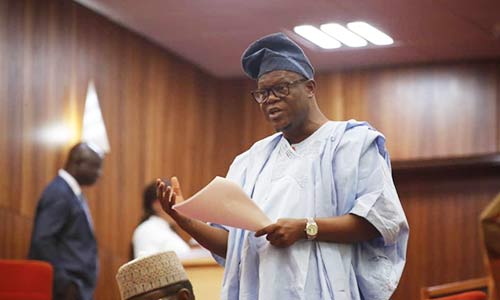 The National Assembly is not planning to gag the media through the proposed amendment of the Nigeria Press Council (NPC) Act, Senate spokesman Ajibola Basiru has stated.

Basiru spoke in Abuja while answering questions from a reporter after declaring open a two-day capacity building workshop for media aides to Principal Officers and Information Personnel of the National Assembly, in Abuja.

The workshop was organised by the National Institute for Legislative and Democratic Studies (NILDS).

He insisted the current efforts to amend relevant media laws by the National Assembly should not be misconstrued as an attempt to gag freedom of speech and free press.

Responding to a question on the growing fear that there is an attempt to gag the media in view of two media bills currently being considered by the House of Representatives, Basiru said: “The media cannot be gagged in Nigeria. The fact that you regulate certain untoward activities does not mean you are gagging the media.

“We have one of the most liberalised media industries in Nigeria – private radio stations, private television stations and news online – but at the same time, there has always been the tension between right to freedom of expression and of course, the untoward activity that extreme use particularly false information can render on society.

“So regulating (the media) in order to take away unsavoury attitude would not mean the media is being gagged. Media cannot be gagged anywhere in the world.”

Director-General NILDS Abubakar Sulaiman, said there is urgent need to provide some levels of checks on “a culture of misinformation” under the guise of freedom of speech.

In his presentation titled: “Communication with tact and diplomacy” a Political Science lecturer, from the Igbinedion University, Okada, Professor Adeolu Akande, stressed the needs for media aides to master the act of communicating and convincing their audience without generating unnecessary controversies that could further complicate matters for their principals.