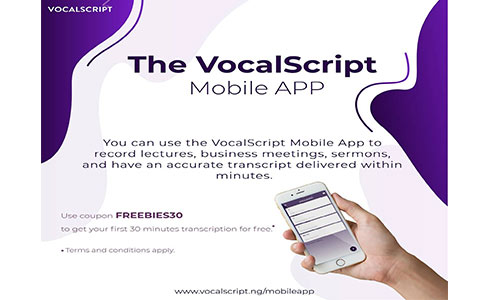 In a bid to reduce the number of hours spent in transcribing voice recordings, some young Nigerians have developed an indigenous digital transcription software called Vocalscript.

The company revealed that the innovation would boost the productivity of journalists, law firms, churches, corporate entities and individuals that spend hours and days struggling to transcribe recordings.

One of the founders of the company, Kola Olanipekun said members of his team were exploiting technology to make life easier across different sectors that need the service. He said it was sad that many members of the target audience were either ignorant of the existence of the technology or do not know how it functions.

“What we do is to convert what has been said vocally into a written form. And this can be done within a very short time. We have tailored the service for diverse sectors. For example, lawyers can have a standard record of court proceedings; students can have accurate lecture notes without missing a word; companies can have detailed minutes of meetings as well as discussions in seminars transcribed to aid productivity.

“Statistics show that journalists spend up to six hours or more a week transcribing audio, which adds up to two lost business months in a year. Using the traditional method to transcribe could be tedious. In fact, it is a job on its own, but most professionals including journalists do it side by side their duties. More than 20, 000 businesses in Nigeria engage in one form of transcription or the other but there is no company in the country that is fully into audio transcription.

“We are currently using machine learning to understand even the thickest Nigerian accents to aid in local speech recognition. So, the turnaround time will definitely improve. We are positive that people will see the value in time. It has since been embraced by many countries across the world. We also do subtitling and closed-captioning of videos, and translation of languages.

“Outsourcing transcripts to us provide flexibility, guarantee superior quality, timely delivery, reliability while freeing up journalists and other professionals for more other important work. This is the first indigenous transcription software that is developed by Nigerians and for Nigerians. It is specifically crafted having the diversity of Nigerian accents in mind,” he said.

Apart from the automated plan that transcribes works in a few minutes, he said that the company also has an in-house transcription team who vets files for quality, to meet the demands and requests from companies and individuals.

He said that the services attract certain fees, but he quickly explained that the charge is as low as fifty naira per minute for the automated plan which is also known as artificial intelligence.

Olanipekun assured users that their privacy and protection of information given to the company for transcription would not be tampered with. He said that none of his team members was at liberty to disclose any information received from clients. He said that this was necessary in order to avert legal consequences.

The company’s web developer, Alli Olasukanmi said that though the Vocalscript Application was user-friendly, the site was carefully built and well protected from hackers.

Stressing on how the software works, he said that the company uses state-of-the-art technology to provide an easy-to-use web platform and a handy mobile application for the average Nigerian. He explained that users could make recordings on the mobile app or upload previous recordings and have accurate transcripts delivered within minutes to hours.

Away from that, the group has a mobile app which can be downloaded on the Google Play Store as well as the Apple iOS Store. The recordings can easily be uploaded via the web or mobile app and then transcribed either automatically by our innovative A.I. or by our dedicated team.

Quite a number of organisations already use their service, and they are certain that you will benefit from it. Their explainer video can be accessed here