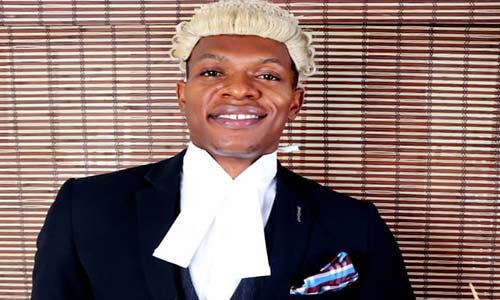 The ugly scenes that issued from the precincts of a Federal High Court in Abuja, on Friday, 6th December 2019, unarguably passes of for the worst affront by the Muhammadu Buhari regime to all canons of constitutionality and Rule of Law.

Not even under the dark years of military rule did we witness such untrammeled abuse of the Rule of Law. It is patently sacrilegious that it can only compare to the murder of Archbishop Thomas Becket by the Knights during the reign of Henry II in 1170 and as masterfully depicted in T.S Elliott’s Murder in the Cathedral. If there is any difference, it is that here, we are dealing with rogue security operatives running amok in a temple of justice. It is a huge slap on the face of the Judiciary; and raises serious concerns for the Independence of the Judiciary, Separation of Powers and the entire institution of the Law in a state that lays claim to democratic ethos.

The face saving rebuttal issued yesterday by the Department unfortunately does not absolve it of any complicity in the morally reprehensible act. Ofcourse, it only takes a little scrutiny to see that it is an attempt at damage control seeing the international dimension the ugly show of force has taken, with at least one senator of the United States making statements that threatens Nigeria’s relationship with the West. The vacuity of DSS’ rebuttal is manifest against the backdrop of the fact that Sowore is on a Judicial, and not Administrative bail. It thus follows that any so called breach of the terms of his bail as claimed by one Peter Afunanya of the DSS, can only be met with a mandatory order of the Court rescinding the bail granted Sowore by the issuance of a warrant for his arrest. The question is therefore begged, at what time did the self righteous DSS operatives obtain the warrant for the re-arrest of the accused Sowore, whether inside or outside the court premises since it had only released the latter some 24 hours ago? Within these posers lay the weakness of DSS’ negative, but by all means pregnant traverse and Nigerians should be able to see through it.

Watching the roforofo fight between lawyers-decked in wigs and gowns, and operatives of the State Security Services within the chambers of a law court in that video that is still making the rounds on the social media at the time of this writing, brings to a morbid consciousness the utter descent of Nigeria into a state of dystopia in recent years. Or if you like, a Hobbesian state of nature without government, laws, civilization nor power to restrain the human nature. Putting the charade into more perspective, one notices a sense in which it accords with the medieval concept of “war of all against all” where the government with the monopoly of instruments of coercion seeks to trample dissents of all kind, instill fear in the population, and rule by conquest.

Yet, looking back with the benefit of hindsight, one notices that it was always going to lead here. The President Muhammadu Buhari regime had hardly settled down to the business of governance following the popular victory in 2015, when it contrived a midnight raid on the homes of senior Judicial officers in Gestapo style by the self same DSS on a purported sting operation. It was the first act of intimidation of the Judiciary by the regime but which the Nigerian public had unwittingly justified as an action towards the fight against a phantom corruption.

If that was not enough, the president would stun a gathering of lawyers at Abuja only few months after the attack on Judicial officers, with his infamous “national security is above the Rule of Law” statement. Only then, did Nigerians come to the realization that the security operatives were only acting in accordance with the base sentiments of Mr. President. But unfortunately, the genie was already out of the bottle.

Last year, the same level of madness by the same secret police was carried into the chambers of the National Assembly. Nigerians woke up to a barricaded National Assembly by hooded security operatives acting based on “orders from above”. It was such an ugly spectacle that brought back the memories of military Coups ‘etat.  Even though that ugly episode led to the perfunctory sack of the headship of the operatives at the time, no word has been heard till this day on the investigations that was supposedly embarked upon to unravel the circumstances that led to such Machiavellian show of force, though it fitted into a pattern that the current regime had come to be associated with.

The vile nature of the events of Friday is such that makes nonsense of any attempt to embark on an academic or legalistic consideration of the actions of the DSS.  But for completeness, it is meet to put it clear that the law is settled beyond peradventure that law enforcement agencies lacks the vires to effect an arrest of a citizen within the premises of a Court especially while the court is sitting. Another officious environment that enjoys similar privilege is the chambers of the National Assembly. And the reasons are not farfetched. Consequently, the actions of the DSS are wrong legally and otherwise. Peter Afunanya’s kneejerk alibi is only late in the day, and in any event, a clearly rehearsed afterthought.

In the wake of the murder of Thomas Becket by the King’s knights in T.S. Elliott’s play, the murderers made representations justifying their execrable act. To them, “the murder was all about right and for the best: it was in the right spirit, sober and justified so that the church’s power would not undermine stability and state power”. It is instructive to note  that Elliot’s work was written at the time of rising fascism in Central Europe. And the government through its lackeys did everything possible to crush all forms of dissent.

The motivations under which the murderer-knights acted in Elliot’s Play, mirrors the circumstances of Sowore’s travails at the instance of the DSS. The danger therefore, is that the rogue operatives may be carrying on with an innocent conviction that they’re acting in the best interest of the state (read Muhammadu Buhari) to the extent that Sowore set out to lead a revolution of the Nigerian people against bad governance as supervised by President Muhammadu Buhari.

But these uncivilised “wild dogs”  must at once leave their imaginary islands and come to the realization that Nigeria is not a fascist state but a democracy where the freedom of speech and civil protest by the citizenry is sanctioned by the Constitution and the African Charter on Human and Peoples Rights. Acting based on notions and ideologies that dominated fascist Europe in a democratic setting is the very act of canonisation of arrogance.

Arising from the above, I associate myself with the admonition of the Nobel Laureate to president Muhammadu Buhari, namely to call his “wild dogs to order” or risk the unintended consequences of their barbarity. It should be to the discredit and concern of this regime that the public perception of it, is one of abuse of powers with little or no regard for their implications to our democracy and even more importantly, national peace. No person, other than the President, to whom the DSS is directly answerable, has the capacity to stem the mind boggling descent of Nigeria into a totalitarian enclave owing to the activities of the operatives. The bold steps must therefore come from him.

Assuming he is minded in that regard, a first place to start would be to empanel a committee to investigate the remote and immediate circumstances that eventuated the macabre of Friday, and the prosecution of all officers and men as may be found culpable. Going forward, the president may consider sending an executive bill to the Senate modifying the powers of the DSS so that it does not become an excrescence on the nation as the events of the recent past has shown.

The survival of Nigeria as a sovereign nation is more important than the powers who I imagine wants to get back at Sowore. Yet, caution must not be thrown to the wind while at that. When government anywhere in the world carries on with a reign of impunity, it looses the moral authority to govern and invites a rebellion from within. Nigeria being a democratic state, the Rule of Law, must not only be observed, but must be seen to be observed. And the government through its several institutions is not left out in the equation.