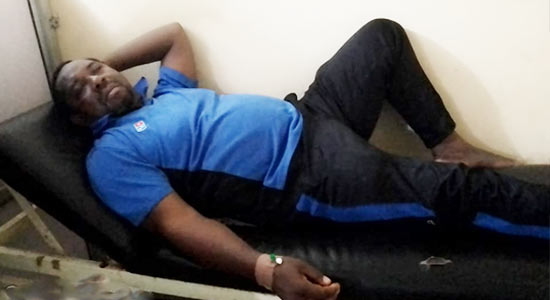 The Chairman Nigerian Bar Association Makurdi branch, Justin Gbagir, Esq. has narrated how the beating he received by some officers of the EFCC, under the instructions of the Officer in charge of Makurdi Zonal Head Office, EFCC, Oseni Kazeem, has landed him on the admission bed at Benue State University Teaching Hospital, Makurdi (BSUTH).

Justin Gbagir, in his statement sighted by TheNigerialawyer(TNL), addressed to the members of his branch, which include the Learned Silks, and Senior Colleagues noted that the security officers threatened to shoot him because he went to the office over the news he got about the arrest and detention of the branch Treasurer, Aver Shima.

“Yesterday, Tuesday 8/6/2021 at about 6:59 pm, Benue State Attorney General and Commissioner for Justice, Michael Gusa Esq, called to intimate me that our colleague who is also the Branch Treasurer was detained by the EFCC.

“On further inquiry, I found that our colleague was detained on an allegation that she gave legal advise to the Chairman of Benue State Universal Basic Education Board (SUBEB) upon which the latter signed a document which is subject of an investigation by EFCC.

“Our said colleague is a law officer with Benue State Ministry of Justice and assigned to offer official legal services to SUBEB. She also Chairs one of the Rent Tribunal Panels.

“I rushed to EFCC office. On my way, I made a post on our Branch WhatsApp Page and enjoined other colleagues who could make it to join me at the EFCC office in Makurdi.

“Immediately I alighted from the NBA official Bus, the security at the gate of EFCC shouted at me “who are you?” and I replied that  “I was a Nigerian”.

“As I approached them almost all of them started shouting at me to go back pointing their guns at me that if I step forward further, they will shoot me.

“At the time, the State Director of Public Prosecution who was standing across the road in front of Royal Choice Inn, a hotel directly opposite EFCC office was calling me to turn back.

“I turned back and went to where he was standing by his car with another Director from the State Ministry of Justice.

“As a result of the shock of threat by the security at the EFCC office to shoot me, I immediately called our pragmatic and action President, Olumide Akpata, Esq. who also answered my call at first instance and briefed him of the development. I even joked over it that even if I am killed, my colleagues will brief him and he advised I take it easy.

“While I was still talking to Mr. President on Phone, the State Attorney General and the Permanent Secretary and Solicitor General arrived.

“One of the personals of EFCC who was wearing knickers and personal wears approached us where we were standing across the road and confronted me that he was informed that we were there to protest. I told him to call the person who said so to come and say that in our presence. I stated that I am surprised that the same people who did not even listen to me when I came would turn around and be accusing us of coming to protest.

“He now ordered us to leave the place or he will call for our forceful eviction. I, therefore, told him that we were not even in their premises since they did not allow us on their premises and they have no legal right to force us out of where we were standing.

“As the said personnel returned back to their premises, some lawyers joined me and we all stood across their office waiting.

“Hitherto, I was informed by the Senior Special Assistant to the Governor of Benue State on legal matters that he was in touch with the Head of EFCC office and were discussing the possibility of releasing our colleague. This of course had informed the basis of our waiting.

“Eventually, the Head of Office arrived and drove into their premises. As the AG and PS/SG approached the gate, the personnel at the gate started shouting at them and ordering them to retreat.

“It took the intervention of the Senior Special Assistant to the Governor who arrived at that moment to halt the harassment of the AG and PS/SG.

“When the 3 of them went into the premises, the Solicitor General came out and requested that the Head of office requested that I go in as well. I followed him into the EFCC office premises.

“As we entered, the Solicitor General introduced me to the EFCC Head of office that I am the Chairman, NBA Makurdi Branch and offered the sit he was previously sitting before he went out to bring me.

“As I made to sit down, the EFCC Head of office said I cannot sit down because I am “an agitator”.

“I then asked whether I was brought in as an accused? When he did not answer me, I told the AG that with due respect, I cannot be made to be standing talking to the EFCC Head of office, and sought the leave of the AG to leave.

“As I made to leave, the personnel of EFCC numbering between 7 and above pounced on me and started beating me. They broke my recommended reading eyeglasses in the process and pushed me out of the premises.

“Outside the premises, the threw out my footwears which I was dispossessed of in the course of the beating.

“Infuriated, the AG, SG, and SSA to the Governor also walked out of the premises and the AG met I and other lawyers including the DPP who were outside that we should leave.

“Because of the excruciating pains I was having as a result of the beating, I went to Federal Medical Centre at Atiku Abubakar Road, Wadata, Makurdi, but they told me to go to their main Centre at Apir.

“As a result of the severe pains, I could not start going to the FMC Apir which is at the outskirt of  Makurdi.

“I then decided to come to BSUTH where I was admitted and is receiving treatment.

“I slept off after the hospital administered several injections to relieve the pains. I wake in the early hours of this morning to make this post.

“Meanwhile, I am still having serious bodily pains around my neck,  left eye, my waist on the left and right hand,” Gbagir, narrated.