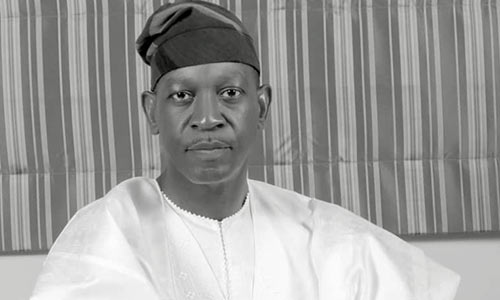 Dr. Babatunde Ajibade, SAN, has reaffirmed his decision to Contest For The Office Of NBA President, comes 2020, despite Egbe Amofin endorsement.

Dr. Ajibade disclosed this in a statement made available to TheNigerialawyer on Saturday after the meeting held by Egbe Amofin.

His statement reads: “Egbe Amofin held a meeting today, 14th December 2019 in Ibadan and I understand that it resolved to adopt one of the contestants for the office of President of the Nigerian Bar Association (NBA) as its candidate in the 2020 NBA elections.

“For the detailed reasons stated in my letter of 8th November 2019 addressed to the Chairman of the Elections Advisory Committee set up by Egbe Amofin, which is attached, I withdrew from participation in that selection process.

“The purpose of this statement is to notify and assure members of our noble profession that I remain resolute in my decision to contest for the office of President of the NBA in next year’s elections and will so contest, God being my helper and preserving my soul until then”.

TheNigerialawyer reported that Dr. Babatunde Ajibade, SAN, Ph.D. (Lond). FCIArb withdrew from the Egbe Amofin selection process of a Presidential candidate citing a lack of transparency, fairness, and the presence of the likelihood of bias.

Producing records of communications between the Secretary of the Egbe Amofin 2020 NBA Elections Advisory Committee, Dr. Oluwole Akintayo, and himself, the Learned Silk registered his discomfort in a letter written to the Chairman of the committee, Chief Adeniyi Akintola, SAN, dated the 8th day of November, 2019, and perused by TheNigerialawyer (TNL).

Dr. Babatunde Ajibade, SAN, had earlier requested the publication and disclosure to all intending contestants of the criteria and the method by which the committee intends to score/assess each contestant, and also, the full details as to the membership of the committee.

In response, the secretary of the committee furnished Mr. Ajibade with what the committee resolved to adopt as a criteria in proposing a candidate, and also, the membership of the committee. However, this did not go down well with the Learned Silk, as he is said to have serious misgivings about the adequacy of the information Dr. Oluwole Akintayo has supplied, and the procedure the committee has adopted.

According to him, the secretary has not provided any information as to the method by which the committee intends to score/assess each contestant and ultimately reach its decision as he had requested, and that, he also has not indicated whether the assessment will be based on a points scoring system and if so, whether the indicated criteria will carry equal weight.

“You have indicated that the task of the committee is to advise the Egbe Amofin, which retains the prerogative to decide how the consensus candidate is to emerge. In my respectful view, these two points defeat the entire purpose for which the committee was established. My understanding was that the Committee was set up in order to isolate the leadership of Egbe Amofin from the election process and from any insulation of bias. By failing to set out the method by which the committee’s role is only advisory and is subject to the final decision of the Egbe Amofin, the committee has failed to provide me with the assurance I seek as to the likelihood that this process will be fair.

“To leave the final decision to the leadership of Egbe Amofin or to Egbe Amofin as a whole, to my mind, questions the necessity, integrity and transparency of this whole process. If I become the next president, I intend to run a transparent and honest administration. To, therefore, begin my journey with a process which falls short of this violently offends against the values that I stand for. Given the identity of the contestants, and their relationship with the leadership of Egbe Amofin, the committee ought to have realized that there is a need for it to bend over backwards and be ultra-transparent in conducting its proceedings, so as to give the contestants the comfort that the process would be fair. The committee has not provided me with the needed comfort. Consequently, I regret to inform you that I have decided to withdraw from this process,” he said.

In response, Dr. Oluwole Akintayo noted that the task before the Committee is a sensitive one, and that its success depends on the integrity of members of the committee and the willingness of the aspirants to subordinate their individual aspirations to the overarching interest of Egbe Amofin. He further noted that the committee will have to report its decision to the larger body for adoption, and that he does not think the leadership of the Egbe Amofin can impose any candidate on the entire membership of Egbe Amofin and thousands who believe in its ideas.

Rumours have it that Wole Olanipekun, SAN, the Vice Chairman of Egbe Amofin, who is now acting as the Chairman of the body is in support of one of the aspirants, Dele Adesina, SAN, who is his in-law. This has made some to raise eye-brow over the constitution of the membership of the committee. According to a source who is spoke to TNL, just when it was resolved that a committee be constituted to address the issue of selection of a candidate, the leadership informed them that Chief Adeniyi Akintola, SAN, is the chairman, which means the committee has already been formed. This has raised other questions about the whole process.

COVID-19: We ‘re In Negotiation With Vaccine Manufacturers For Supply –...