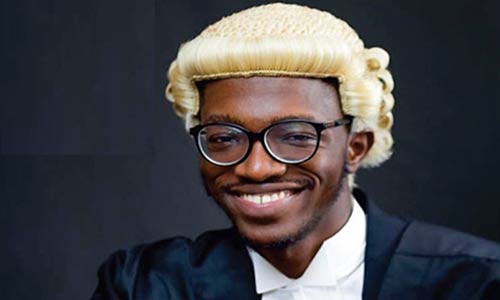 Mayowa Abiru was the overall best student of the six campuses of the Nigerian Law School in the 2018/2019 academic session. The 22-year-old, who is a graduate of Babcock University in Ogun State, tells TUNDE AJAJA  of Punch, his plans for the future and how he moved from having a second-class degree at the university to being the best law student in the country

How best would you describe your recent academic feat at the law school?

It is a dream come true. I worked hard and prayed to God every single day of the law school session that my efforts should be crowned with success, and God made it a reality. My joy knew no bounds as I stood and watched my parents look at me with so much joy and pride. There is no better feeling in the world, than being able to put smiles on the faces of parents who have sacrificed so much for you – it was a blessing beyond my imagination, one for which I am eternally grateful to God.

Also, I felt a sense of restored belief in a system that rewards those who are deserving of it. In the Nigerian Law School, if you work hard for it, you will get what you deserve.

You must have won a number of awards as the overall best student across the campuses; how many did you win?

You graduated with a second-class (upper division) degree from the university; did you make conscious effort to do better at the law school?

When the results for the Lagos Campus pre-bar final tests came out at the end of the term, I had the best result overall in Lagos. From that point on, I knew nothing was impossible and I prayed to be the overall best in Nigeria. I knew it was a tough one but I knew it was possible. My civil litigation lecturer, Mrs Odukoya, also prayed for me. Even though I fell ill before and during the exams due to the pressure, and I was sleeping from 9pm to 7am, God still did it. Interestingly, my mum had, from our resumption at the law school, always prayed for me to be the best overall student in Nigeria, but we all laughed at home and thought she was being very hopeful. But she never stopped saying it; she held on tightly to her faith and I guess God just made it happen and I thank Him for how things turned out; He made it happen.

Were there times you felt you put yourself under too much pressure?

Yes, looking back now, I think I put too much pressure on myself and that was not healthy enough. I thank God it turned out fine, but on the other hand, I’ve learnt that your grades don’t necessarily dictate who you are. There is more to us than our grades.

Were there specific things you had to stop doing when you got to law school to attain your goal?

Yes, I had to gradually cut down on how much time I devoted to Netflix and PlayStation. I managed my time better such that I had targets that I met compulsorily every day and no hour of my day was unaccounted for. However, once I met my target for the day, I was free to spend the rest of the day how I liked (laughs). I also asked for help when I needed it, especially from two of my friends, Dapo and Chioma, and they were always ready to listen. I owe both of them a lot. Beyond discipline, I had to persevere, be consistent and sometimes do character adjustment. I was seeking a level of success that I had never attained before, and so I had to work like I had never worked before. It wasn’t a smooth journey but I was resolute. Also, my parents were extremely supportive; they went through it with me. I also prayed to God every day to order my steps and He did.

Some law students going to the law school would be curious about your reading schedule; what was it like?

I set out my academic goals for the day in clear achievable terms and I did all I could to meet up. So, what worked for me was to work during the day and sleep at night. But in spite of that, I was quite sociable in law school. I met good people that I would cherish forever and I attended different gatherings with my peers. It would have been boring if everything was about my studies.

In your secondary school, you were the best in five of your courses, what has always been your motivation for excellence?

My parents instilled the spirit of hard work in us from time and that we had to put in our best to do well in school. So, I have always loved prizes and awards and I love how it makes my parents happy. It was always my own little way of repaying their efforts and bringing honour to my family.

Given your outstanding performance, were there times your parents rewarded you for excellent performance?

Never, my parents would never reward you with material gifts for performing well in your studies. My father is opposed to that idea. I think the reason is because they always want us to understand that performing well in your studies is a favour to yourself and not a favour to your parents. They didn’t want us to work hard because of a gift that was waiting for us; they wanted us to work hard because it was the right thing to do. Nonetheless, they buy us things, but never as a direct reward for academic excellence.

Now as a lawyer, would you say you are in your dream profession?

I believe I am where I’m supposed to be at this point in my life. Everything I have ever done in my life has led me to where I am now; nothing was by accident. I was attracted to law because of my fondness for solving problems. I always viewed lawyers as problem solvers – people you go to when you have an issue or when you are trying to avoid having an issue. Also, I always preferred working with language to working with numbers (laughs).

What excites you the most about the profession?

I think the versatility of law and the fact that as a lawyer, you can apply yourself in so many different sectors and industries because there is virtually no sphere of human endeavour that does not have law in it. So, I’m really excited about the possibilities that law affords me and not doing the same thing in the same way forever, which tends to be a bit boring.

How easy was it for you to cope, especially given how voluminous law courses are?

It isn’t easy for any law student to cope with the volume of information that we are required to process and retain. However, right from my university days, I have learnt that law is not a course in which to procrastinate. My advice to every law student is to start their work as early as they can. Do not leave postpone everything, otherwise you are at risk of being overwhelmed and collapsing under the sheer amount of information you are exposed to.

How would you have felt if you had not graduated with a first-class degree at the law school?

Naturally, given the amount of pressure I was under and the amount of work I put into it, I would have been devastated. That is the honest answer. It is only human for one to be devastated after working so hard and sacrificing so much, and still miss the desired goal. That was how I felt when I graduated from the university. But like I said to myself back in 2018, I would advise anyone who missed their goal that it is not the end; they can still work hard and surpass everyone’s expectations in the future.

Some lawyers describe litigation as exciting while some feel otherwise, what aspect of the profession are you interested in?

Well, I don’t like to speak authoritatively on things that I have yet to experience fully. So, I have yet to form an informed opinion on where I would like to place my interests. I intend to use my first year in the profession to try my hands on many areas to know where I really fit in.

Given your resolve to graduate with a first-class degree from the law school, what was the most extreme thing you think you did in your studies to attain that goal?

This question brings back many funny memories. Back in law school, I would read anywhere I had to just to meet up with my target. There was a day I was stuck at the police station for a whole day because someone damaged my car while we were held in traffic. While I was there, I started reading. There was also a time I was in the hospital before my exams and was instructed to rest. I would download my notes on my phone and sneak around in the hospital to read. There was even a time that we had a party on my street and they were making a lot of noise. I went there and politely asked the DJ to reduce his music. Though he didn’t, I had to try.

Knowing that law is very voluminous, were there methods you deployed to help you remember things?

Practice, practice and more practice. Consistency was my best tactic. I would do it over and over until it became my second nature, especially with my drafts.

What advice do you have for students who wish to have your kind of result?

My advice is this: “Discipline, not desire, will determine your destiny”. It was a quote I used in law school. If you indulge me, I would like to spare a word for my friends and colleagues who did not pass the bar exams in their first attempt, for one reason or the other. Think no less of yourself, because your time is coming. I understand if you feel devastated right now; that is human. You can give yourself time to be sad, but come January, please be bold again, be strong again and don’t give up on yourself. The world can’t wait to celebrate you next year.

You are a certified member of the Institute of Chartered Secretaries and Administrators of Nigeria, at what point did you enrol for that?

I enrolled for it in 2017 after my fourth year in the university. That was a move that was motivated by one of my mentors, Prof Deji Olanrewaju, who was my Dean at Babcock University. He encouraged me to take the exams, even though I argued against it at first. In the end, I was very happy I heeded his advice and took the exams. I was inducted into the institute in 2019.