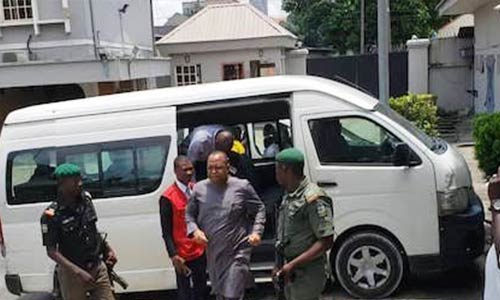 Former Vice-President Atiku Abubakar’s son-in-law, Abdullahi Babalele, has sought the permission of a Federal High Court in Lagos for a foreign medical trip on the ground of his “life-threatening” illness.
.
Babalele tendered medical reports from three hospitals – two in Abuja and three in London – showing his health status.

The defendant is being prosecuted by the Economic and Financial Crimes Commission (EFCC) for allegedly laundering $140,000 in the build-up to the last general elections.

The EFCC charged him with the offence on August 14, 2019, before Justice Nicholas Oweibo.

But the case was re-assigned and transferred to Justice C.J. Aneke.

Babalele was re-arraigned before the new judge on Tuesday.

He pleaded not guilty.

Justice Aneke granted his prayer to continue on the N20m bail with one surety earlier granted him in August by Justice Oweibo.
But Babalele, through his counsel Chief Mike Ozekhome SAN, applied for permission to travel abroad for treatment of his ailment.

Ozekhome told the judge that the application contained medical reports from Samiya Hospital and the National Hospital both in Abuja and another one from a Michael Warren, from a London hospital.

He also told the court that all the annextures to his application “points to great danger” if the defendant did not attend his medicals.

The lawyer prayed the court to grant the application and release his client’s passport to enable him travel.
But EFCC counsel Mr Rotimi Oyedepo opposed him.

Oyedepo prayed the court to refuse the application and make an order for accelerated hearing of the charge.

Oyedepo contended that there was no invitation for Babalele to come abroad for treatment, as the one purportedly issued by Michael Warren bore a September 12, 2019 date, which had passed and “there is no appointment to be kept”.

He also argued that all the annextures tendered by the defendant did not suggest that what was diagnosed about the defendant’s ailment could not be treated in any Nigerian hospital.

Following the conclusion of arguments, Justice Aneke adjourned till October 11, for ruling on the application.

Meanwhile, further hearing of the money laundering charges filed against Atiku’s counsel, Uyiekpen Giwa-Osagie and his brother, Erhunse Giwa-Osagie, has been adjourned till October 15.

Uyiekpen, a partner in the African Law Practice (ALP) and his brother Erhunse, were arraigned on August 14, before Justice Nicholas Oweibo for allegedly laundering $2million.

The Giwa-Osagie brothers are facing three counts of conspiracy, aiding and abetting and money laundering.

They pleaded not guilty and the matter was adjourned till yesterday for trial by Justice Oweibo.

However, upon reassigning the case file to Justice Chuka Obiozor, he fixed the new date.