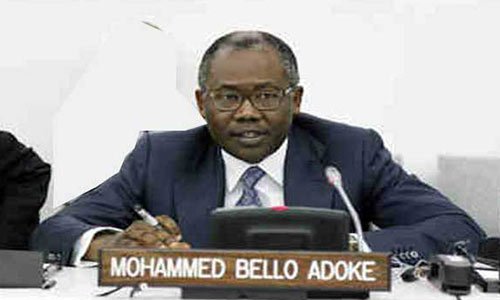 The Economic and Financial Crimes Commission (EFCC) has sent charges against the detained former Attorney-General of the Federation and Minister of Justice, Mr. Mohammed Bello Adoke (SAN), to the International Police (INTERPOL) in the United Arab Emirates (UAE).

The transmission of the charges was to prevent Adoke’s release from INTERPOL custody in UAE. The EFCC claims the former minister has cases to answer in six or seven other jurisdictions on the $1.6billion Malabu Oil Block (OPL 245).

The other jurisdictions are Italy, Netherlands, Switzerland, Italy, Portugal, UK and the United States of America (USA).

Also, the EFCC said it had uncovered another $1.3billion tax fraud in the agreement on Malabu Oil Block.

It said some tax exemption clauses in the agreement in favour of Shell and ENI included Petroleum Profit Tax and Value Added Tax (VAT), among others.

It said it was unfortunate that the Federal Government was excluded from Production Sharing Agreement on Malabu Oil Block.

The EFCC listed other allegations against Adoke including alleged conflict of interest on Malabu Oil Block; alleged involvement in the $9.6b judgment award against Nigeria by Process and Industrial Developments (P&ID); and clarification of $2, 267, 400 Malabu Oil cash paid to a Bureau De Change operator.

But, Adoke’s counsel, Chief Mike Ozekhome (SAN), has written to the Attorney-General of the Federation and Minister of Justice, Mr. Abubakar Malami (SAN) requesting for a letter of attestation to get the ex-Minister’s release.

The INTERPOL is demanding a letter of attestation from Malami on the vacation of warrant of arrest against Adoke on October 25, 2019 by a judge of the High Court of the Federal Capital Territory, Justice Danlami Senchi.

Investigation revealed that the battle over Adoke has become intense, both in the United Arab Emirates (UAE) and the Office of the Attorney-General of the Federation (OAGF).

While the INTERPOL is insisting on its Red Alert on Adoke, the lawyers of the ex-minister are clinging to the October 25 cancellation of the warrant of arrest.

But, the EFCC insisted yesterday that Justice Senchi said once the charges are served on Adoke, the court will restore the warrant of arrest.

It was gathered that based on the court’s ruling, the EFCC yesterday forwarded the charges against Adoke to the UAE.

A source, who spoke in Abuja yesterday, said: “The development in the UAE is a good one. We had prepared the motion and application for substituted service on Adoke and 11 others when the news of his arrest by INTERPOL came up.

“This is a very interesting development. It shows that there is no hiding place again anywhere in the world and it is no longer business as usual.

“We have sent the charges to INTERPOL in the UAE; we are trying to serve him. We are in touch with the INTERPOL because Adoke has cases in six other jurisdictions including Italy, Netherlands, Switzerland, Italy, Portugal, UK and the United States of America (USA).

“The whole essence of the warrant was to enable us serve the charges. We need to serve directly or through substituted service.

“In one of the charges before the High Court of FCT, Adoke, a former Minister of Petroleum Resources, Dan Etete, Aliyu Abubakar and Malabu Oil and Gas Limited were alleged to have received the aggregate sum of US$ 801,540,000 from Shell Nigeria Exploration Production Company, Nigeria Agip Exploration Limited and ENI SPA in relation to the grant of Oil Prospecting Licence (OPL 245).

“We are seeing the lawyers of most of the suspects for the first time after over 12 adjournments. That was why we applied for warrant of arrest ab initio.”

The source added that serving the charges to the UAE could be “a basis for detaining or bringing Adoke back to this country because Nigeria has Mutual Legal Assistance Treaty (MLAT) with the UAE. As a nation, Nigeria is a signatory to the United Nations Convention Against Corruption (UNCAC). So, by invoking MLAT and UNCAC convention, the INTERPOL can arrest and repatriate Adoke to Nigeria. All we need to do to bring Adoke home is to activate all these agreements.

The other allegations against Adoke as listed as follows:

Conspiracy and money laundering on Malabu Oil Block
Conflict of interest on Malabu Oil Block
Alleged involvement in the $9.6b judgment award against Nigeria by Process and Industrial Developments (P&ID)
Clarification of $2, 267, 400 Malabu Oil cash paid to a Bureau De Change operator which was changed at N152. 24 rate amounting to N345, 200,000
A document stated: “There is an issue on conflict of interest. Before Adoke became the AGF when Malabu Oil filed a case before the Commercial Court in London, he was the one representing Nigeria.

“In all his presentations, he refused to disclose that he has been representing Nigeria.

“Also, we are looking for him on how they arrived at the agreement on Malabu Oil Block. For instance, in arriving at the agreement, they removed certain clauses that deal with taxes in contravention of the laws on ground. Some of these taxes are Petroleum Profit Tax, Value Added Tax, Company Income Tax and the tax components amounted to about $1.3billion.

“The tax exemptions were to cover the first five years of the operation of the oil block, but they added another five years.

Ozekhome’s letter to Malami obtained by The Nation, is signed by Oluchi Vivian Uche from Mike Ozekhome’s Chamber

The letter reads in part: “We are Counsel to the Applicant Mohammad Bello Adoke, hereinafter referred to as “Our Client”.

“Our Client is the 9th Defendant In Charge No: FCT/HC/CR/124/ZO17 between the Federal Republic of Nigeria vs Shell Nigeria Explanation Production Company LTD & 10 Ors.

“We write on behalf of our Client to bring to the notice of your honourable office, the emailed order of court dated the 25th day of October, 2019, D.Z Senchi J., vacating the earlier bench warrant issued against our Client.

“We respectfully apply to your honourable office to attest to the said enrolled order. Attached herewith is the Certified True Copy of the enrolled order.

“We thank you immensely for your anticipated cooperation. Accept the highest regards of our esteemed Chambers.”