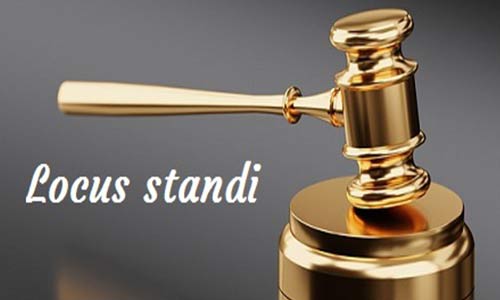 In 2012 a suit filed by the prominent human rights activist, Mr Femi Falana (SAN) challenging the powers of federal legislators to award jumbo salaries and allowances to themselves was struck out by the Federal High Court on the ground that the learned silk lacked the locus standi to maintain the suit. Relying on the authority of Adesanya V The President (1981) All NLR pg 1, the Chief Judge of the Federal High Court, Justice Ibrahim Auta held that Mr Falana did not prove that he had suffered any greater injury than other Nigerian citizens as a result of the action of the lawmakers. We have a lot of recent decisions of courts awarding cost against lawyers on the basis of filing suits without having locus standi.

What is locus standi in the first place? It simply means a standing to sue. As Godwin N. Okeke rightly put it, it implies that to apply to the court for the enforcement of right, or to challenge the actions of the government, or to have a court declare a law unconstitutional or even to litigate in the interest of the public, the litigant must establish sufficient interest otherwise the suit will be struck out. In A.G. Kaduna State Vs Hassan (supra) at 524 G Oputa, JSC stated that:

“The legal concept of standing or locus standi is predicated on the assumption that no court is obliged to provide a remedy for a claim in which the applicant has a remote, hypothetical or no interest.”

The interpretation of locus standi before the Nigerian courts is strict and this has resulted in denying access to justice to many Nigerians who are poor or have no knowledge of their rights as the courts position on standing prevents NGOs or other individuals from applying to the courts on their behalf or litigating in the interest of the public.

Similar position was followed in Chief Thomas v. Rev. Olufosoye (1986) 1 NWLR, pt. 18, p.669. Here the Plaintiffs challenge he appointment of the Defendant as a Bishop because it was made contrary to the provisions of their constitution. The court struck out the matter on the basis of locus standi.

In Badejo v. Minister of Education, [1996] 8 NWLR, pt. 464, p.15, the Supreme Court appears to have resurrected the strict and out dated view on locus standi. The appellant in this case sat for the National Common Entrance Examination and scored 293. She was not invited for interview because she scored below the cut off mark for Ogun State which is her State of origin. The cut off was 296. Students with lower scores were invited for interview because there cut off marks were lower. She was aggrieved with this discriminatory policy and sued seeking to enforce her fundamental right. The trial court dismissed the appellant’s claim on the basis that she lacked locus standi. On appeal to the Court of Appeal, it was held that the appellant had locus standi as her interest was affected. On a further appeal by the respondent to the Supreme Court, the court held that the appellant did not have the legal standing to institute the action. Kutigi JSC who read the lead judgment held that the appellant lacked legal standing. He stated that the fundamental right of the appellant should not stand above the country, state, or the people.

In Njoku v. Dr. Goodluck Jonathan & Ors (2015) LPELR-24496(CA), the appellant challenged the competence of Dr. Goodluck Jonathan’s eligibility to contest 2015 General Elections since he took over from Umaru Musa Yar’adua 1n 2009 and also won in 2011. Despite establishing that he was member of PDP, he had the intention of contesting the office of the president, the matter was struck out for want of locus standi. The court disagreed with the Appellant that the rigidity or demands of locus standi set out in Adesanya’s case has been relaxed in constitutional matters.

Our law reports are full of cases of this injustice.

THERE IS A LITTLE PROGRESS ON LIBERAL LOCUS STANDI

Despite the unfortunate decisions above and many others not mentioned here, there is at least a little progress. We have replete of Nigerian cases from Nineteen Eighties where courts were liberal in handling issues of locus standi. Among such cases is Williams V. Dawodu (1988) 4 NWLR (Pt. 87) page 189 at 218 where Akpata, JCA stated thus:

“There is now the recent case of Chief Gani Fawehinmi v. Col. Halilu Akilu & Anor. In Re Oduneye (1987) 2 NWLR (Pt. 67) page 797 which shows that the Courts have become increasingly willing to extend the ambit of locus standi for public good. The Courts have broken new grounds. The significance of this judicial revolution is that whereas in the past the court showed little or no reluctance in any given case in construing the import of “sufficient interest” against the individual and tended to be more Executive than the Executive, now the term “sufficient interest” is construed more favourably in order to give an applicant a hearing.”

“It needs the courage, wisdom and proper understanding of our social-economic environment for an activist Judge to widen the scope of the law on locus standi. Some Judge and advocates have shown some trepidation in handling this matter. I believe we have to take the bull by the horn and do justice to a matter before the court without bending overly backwards because a matter is on borderline in respect of whether the initiator of an action has the standing order to do so. I think that where the cause is laudable and will bring peace, justice and orderliness that will reflect the spirit of the Constitution then we should not shirk our responsibility in this area to help in advancing the cause of Social, Economic and Cultural matters as they affect this society.

The development of the law of locus standi has been retarded extensively due to fear of floodgate of persons meddling into matters not even remotely connected with them. In my opinion, let them meddle and let the Court remove the wheat from the chaff. I believe that it is the right of any citizen to see that law is enforced where there is an infraction of that right or a threat of its being violated in matters affecting the public law and in some cases of private law such as where widows, orphans are deprived, and a section of the society will be adversely affected by doing nothing.”

“It is important to bear in mind that ready access to the court is one of the attributes of a civilized legal system and it will amount to setting the clock back at this stage for any court to dismiss or strike an action based on the pleading without carefully analyzing the averments and ensuring that there is nexus. Besides, I make bold to say it is dangerous to limit the opportunity for one to canvass his case by rigid adherence to the ubiquitous principle of locus standi which is whether a person has the stand in a case. The society is becoming highly dynamic and certain stands of yester years may no longer stand in the present state of our social and political development…. The court should exercise utmost caution in throwing out a case because of the issue of locus standi.”

In Fawehinmi V President F.R.N. (2007) 14 NWLR (Pt. 1054) 275 the Plaintiff (A Senior Advocate of Nigeria, one time presidential candidate and a politician) approached the court challenging the payment of ministers in dollars by president Obasanjo (as he then was) contrary to the provisions of the Certain Political Public and Judicial Office Holders (Salaries and Allowances) Act. The court, relying on the Adesanya’s case, struck out the matter for want of locus standi but the decision was reversed on appeal. The Court, per Aboki, J.C.A. in pages 344 – 343, paras. D – C held thus:

I am of the opinion that in the Nigerian context and particularly under the Constitution of the Federal Republic of Nigeria, 1999, it would be wrong to slam the door of the courts against complaints on executive excesses and unconstitutionality under the guise of lack of locus standi. Where this is done, the objective of the 1999 Constitution beautifully phrased as freedom, equity and justice may not be attained. The Constitution or any other Law can only be tested in Courts; it is access to the courts for such test that will give satisfaction to the people for whom the Constitution or the Law is made…

The most recent case on the point under discuss is Centre for Oil Pollution Watch V. NNPC [2019] 5 NWLR (PT. 1666) 518. The Appellant, in enforcing its mandate, sued the Respondent at the Federal High Court, Lagos for the alleged neglect of its pipelines in Acha Autonomous Community in Isukwuato Local Government Area, Abia State consequently causing a oil spillage in the said community and among other things denying the inhabitants of the community portable water from its only source, the Ineh and AkuStreams/Rivers. Upon application, the trial Court struck out and dismissed the suit for want of locus standi. When he matter reached the Supeme Court, Counsel for the Appellant, Prof. Joseph Mbadugha together with the following amici curiae – Aiwaju Adegboyega Awomolo, SAN, Lucious Nwosu, SAN and A. B. Mahmoud, SAN were of the view that the Appellant has the requisite locus standi to sue, having shown and demonstrated the required interest to entitle it to sue. They argued that any person with genuine and public-spirited intention should be permitted to approach the court with respect to public interest matters such as the one in the instant case. They urged the Court to expand the frontier and relax the concept of locus standi as applicable to environmental litigation.

On the other hand, Learned Counsel for the Respondent, Victor Ogude Esq., and the amici curiae whose opinions concurred with his – Chief Wole Olanipekun, SAN and Dayo Apata, (Solicitor-General of the Federation representing Abubakar Malami, SAN (the Attorney General of the Federation and Minister of Justice) sought to persuade the Court that the Appellant is a mere busybody or troublemaker (with an abstract corporate soul), usurping the rights of the affected citizens to complain. They also argued that extending the scope of locus standi to accommodate an NGO such as the Appellant in respect of environmental degradation matters would have the effect of usurping the powers conferred on agencies and offices like the Attorney-General’s office established by various State and Federal Laws to protect the environment on behalf of the people. They relied on several statutes which they submitted, have taken care of the Appellant’s grouse. It was also contended that allowing the Appellant standing to sue would open the floodgates to frivolous litigation which will overwhelm the courts’ dockets.

In giving its Judgment, the Supreme Court after considering a host of foreign judgments from common wealth jurisdictions on the matter, lived to its billing as it held that the Appellant has the right to institute the action thereby expanding the scope of locus standi on environmental matters in Nigeria. The Court further held that there is nothing in the Constitution that says the Attorney-General is the only proper person clothed with standing/power to enforce the performance of a public duty or institute public interest litigation such as the instant suit.

It is imperative to commend the few Courts above for their boldness in blazing the trail of this new path as these are the sort of legal advancement society direly needs for her development. Hopefully and with time, courts will maintain this position.