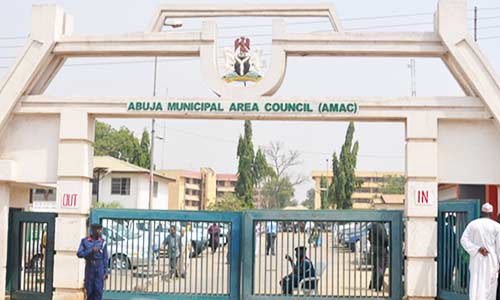 Chairman of Abuja Municipal Area Council [AMAC] Alhaji Abdullahi Adamu Candido recently signed into law an edict approving the payment of pension to the council’s past elected chairmen and speakers. With its passage, AMAC’s past council chairmen would be given an annual pension of N500,000; former vice chairmen are to receive N300,000 each while former speakers of AMAC’s legislature will be paid N200,000 each.

According to Candido, the gesture was meant to honour past heroes of the council who he said sacrificed their talents and energy in building the council. He said it was also to celebrate Nigeria’s 59th independence anniversary as well as celebrate the 35th anniversary since AMAC’s creation. The Chairman said only past leaders who are still living would benefit from the package, which would cost the council more than N6 million annually. Beneficiaries include six past chairmen, six past vice chairmen and eight past speakers.

Candido, who said the payment could start this month, added that it would be a disservice if the past leaders of the council were not honoured. He said, “To forget the contributions of these individuals that brought remarkable development to our people in no small measure and to get AMAC to the high plane it is today will be the greatest ill-treatment to these ambassadors. They are today heroes of this council and we would not allow their labour to be in vain.”

Although the amount involved is not staggering, AMAC is setting a bad precedent as the first local council in the federation to introduce a pension scheme for its ex-elected executives. It is actually borrowing a leaf from many state governments where governors sponsored legislation that provided fantastic pensions and benefits for ex-elected officials including governors and deputy governors. The justification for those benefits was in order to discourage corruption among top government officials, but it is being done against the dwindling resources at the disposal of the governments and the increasing failure by governors to meet the basic yearnings of the electorate.

Many Nigerians as well as Civil Society Organisations have also voiced their opposition to this but the governors have ignored their cries. These pensions and benefits have by no means served to stop or even reduce corruption among the country’s elected and appointed public officers. We believe this is a policy that should not be allowed to take off as it is likely set a bad precedent that others may soon follow. Political actors, especially those holding offices, must begin to see politics and holding any office as an avenue to serve the people and leave a good legacy for generations yet unborn.

Elected office holders must bear in mind that they are also being paid to serve. Nigeria ranks among the top countries where politicians receive the highest remuneration. They should not, therefore, expect the nation to continue to pay them long after leaving office. With dwindling revenue coming to all tiers of government it is time that we begin to look at ways of reducing cost of governance and not to confer benefits on ex-public office holders for life. Rather than ameliorate current problems, this measure could worsen the competition for public office in AMAC, conferring as it promises to do some benefits for life.

We, therefore, urge Candido to rearrange his priorities and chart better ways of channeling the council’s revenue in the best ways to serve the people. From all indications there are many areas that the more than N6 million intended to pay these past leaders can be put to use to raise the living conditions of the council’s residents. The AMAC chairman should not go down in history as someone who set a bad precedent in the country.

We call on the Revenue Mobilisation, Allocation and Fiscal Commission to immediately step up and ensure strict compliance with existing severance package for all elected political office holders in order to guard against abuse of the process.