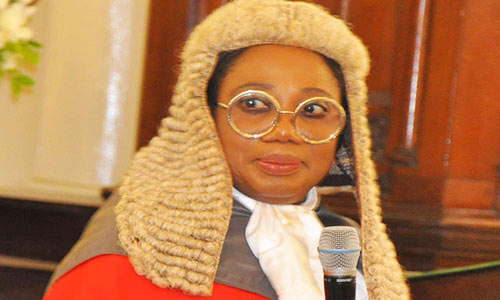 Chief Judge of Lagos State, Justice Opeyemi Oke, yesterday said lawyers who aid the delay of cases in courts by filing frivolous applications would be fined a minimum of N100,000.She also said that lawyers, who fail to file applications within the time allowed by law, would pay N1,000 for each day they defaulted.

Justice Oke said the fines were contained in the 2019 Lagos court rules put together to fast-track justice delivery and decongest the prisons.She, however, expressed disappointment that some lawyers on account of the rules have taken her to court, adding that she is not bothered by the legal action since the Bar has the opportunity of sending memorandum on time during the work of the committee that produced the rules.

The CJ, who spoke at an interactive mentorship session with the law students of the Lagos State University, Ojo, also allayed the fears of female Muslim students over the wearing of hijab during the call to Bar ceremonies.She stated such discrimination no longer exist in Lagos State.

The lady, who was denied two years ago had been called to bar,” she said. Oke used the opportunity to encourage students to show example of brilliance and hardwork, and expressed happiness over the level of development in the faculty.

The Vice Chancellor of the university, Prof. Olanrewaju Fagbohun, commended the CJ for honouring the invitation and embarking on various reforms in Lagos judiciary.Also, the Dean, Faculty of Law, Prof. Funminiyi Adeleke, in his vote of thanks, expressed gratitude to the CJ and appealed to her to continue to make herself available to the university whenever her attention is needed.