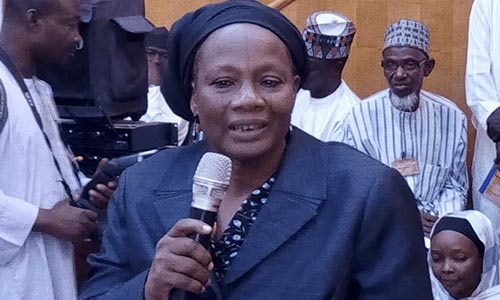 The acting Chief Judge of Kebbi State, Esther Asabe Karatu, has written a petition to the National Judicial Council over Governor Atiku Bagudu’s refusal to confirm her as substantive chief judge of the state.

In the petition exclusively obtained by DAILY NIGERIAN, not TheNigerialawyer the acting chief judge said politics of religion and her firm belief in justice and fairness are some of the reason the state governor denied her rights despite the recommendation of NJC.

On January 17, 2019, the Kebbi State House of Assembly also confirmed Mrs. Karatu as substantive chief judge of the state, but the governor refused to act on the Assembly’s confirmation.

In a letter to the governor, referenced KBHA/LEG/001/XI and entitled RE: APPOINTMENT AND REQUEST FOR CONFIRMATION OF JUSTICE ELIZABETH ASABE KARATU AS CHIEF JUDGE OF KEBBI STATE, the speaker of the state House of Assembly Abdulmumini Kamba conveyed the Assembly’s approval.

“Reference to your submission dated, 6th November 2018, I am glad to inform you that at an Executive Session held on Thursday, 17th January 2019, the Hon. House resolved and confirmed Justice Elizabeth Asabe Karatu as the Chief Judge of Kebbi State,” the three-paragraph letter read in part.

DAILY NIGERIAN gathered that the state governor, therefore, opted for the Grand Khadi of the state, Muhtar Imam Jega.

But the Secretary to the Kebbi State Government, Babale Yauri, said the refusal of the governor to confirm Mrs Karatu as substantive chief justice was not because of her religion.

“The State Assembly did not screen her because of some discrepancies in her credentials. It was not the governor’s fault, and his action has nothing to do with religion,” he told DAILY NIGERIAN on Wednesday.

According to the SSG, the letter purportedly sent to the governor by the State Assembly is fake as it was not duly signed.

In the petition Mrs Karatu wrote to NJC, the judge also made case against the appointment of Justice Mohammed Sulaiman Ambursa to replace her for allegedly being corrupt and friends with politicians.

“After the retirement of Justice Ibrahim Bala, I was sworn in as Acting Chief Judge being the most Senior Judge. However, before my confirmation, Justice Ambursa engaged in trading with the Governor and the Speaker of the House of Assembly and indeed to the public that I was sponsored by the Christians Association of Nigeria to serve the Christendom. He spent a lot of money in forestalling my confirmation at the House, and eventually, the house rejected me on the ground of alteration on my certificate which I believed must have been cooked by Justice Ambursa.

“I have been working for 35 years up to the rank of Permanent Secretary and later became a Judge but Justice Ambursa has never complained about my religion, in fact, most of his victims are Muslims rather than Christians. I, therefore, believe that he is just using religion for his personal gain. I was a Muslim before and all my Children are still devoted Muslims. I know what Islam is all about; it is religion of peace, fairness, and Justice.

“In its effort to harmonize my relationship with the Governor, the NJC set up a Committee of Reconciliation in May, 2019 to come to Kebbi to talk to the Governor about my confirmation and swearing in. However, before the arrival of the members of the Committee, the Attorney General, Ramatu Gulma who is an ally to Justice Ambursa went to the Birnin Kebbi Airport with Government Vehicles to receive the members.

“At the meeting with the Governor, the Attorney General told the Committee that I am the enemy of the Government because I ordered the detention of family members of the Vice President, Yemi Osinbajo who were suspected to have committed the offence Fraud of Millions of Naira before Chief Magistrate Court in Birnin Kebbi.

“The Attorney General accused me of failure assist the vice president’s family who were facing criminal charges which means I am the enemy of his Excellency and his political party. I, therefore, deserve no assistance.

“Before the end of the meeting, it was agreed that I would be sworn in as substantive Chief Judge but the Governor would recommend the next Chief Judge of Kebbi State, but yet I have not been sworn in and I will be retiring on 5th July, 2019.

“Undoubtedly, the entire crisis was masterminded by Justice M.S Ambursa in order to frustrate my administration as Chief Judge. His aim was to become the Chief Judge before 2019 Elections so that he will play a role in the Elections Petition Tribunals being a loyalist to Senator Adamu Alieru, Mr. Rotimi Ameachi, and host of other politicians. It can be recalled that when Alieru was a Minister of the FCT, he allocated a very large plot of land to Justice Ambursa which he later sold,” the petition read in part.