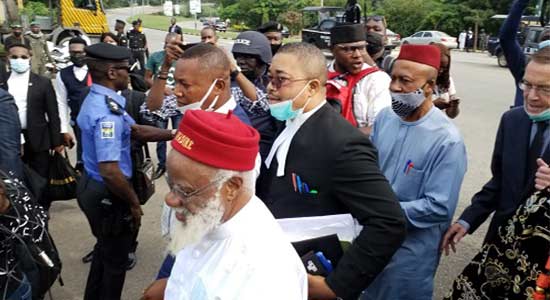 A former Anambra Governor Chukwuemeka Ezeife said he did could not have access into the courtroom in the ongoing trial of the leader of the Indigenous People of Biafra (IPOB).

Ezeife said he was left out in the sun by security operatives who said he could not enter the courtroom without his people.

He also said he did not sight Kanu.

He had arrived earlier in the company of Kanu’s lawyer, Ifeanyi Ejiofor.

He said he was however happy because the unfortunate development would force the birth of a new country where there would be equity for all.

However, some lawyers said they saw Kanu dressed in what looked like a milk coloured tracksuit.

They said he looked well.