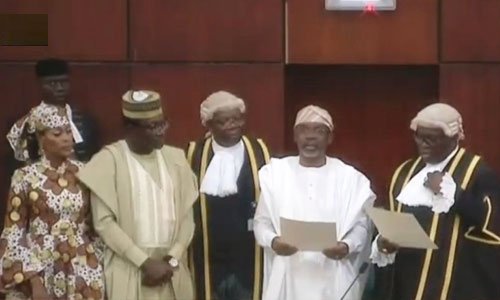 Femi Gbajabiamila, majority leader in the 8th house of representatives, has been elected speaker.

He secured 283 votes to defeat his only challenger, Umar Bago who garnered a paltry 76 votes.

The choice candidate of the leadership of the All Progressives Congress (APC) defeated Mohammed Bago, still of the APC, on Tuesday.

Like Senate President Ahmad Lawan, Gbajabiamila was the preferred candidate of the APC in 2015 but Yakubu Dogara, who was then of the APC, had teamed up with the Peoples Democratic Party (PDP) to defeat him.

Dogara had defeated him with just eight votes.

While the sorting of votes was ongoing, Bago walked up to Gbajabiamila to congratulate him and this elicited a thunderous round of applause among their colleagues.

His supporters, including National chairman of All Progressives Congress(APC), Comrade Adams Oshiomhole, couldn’t hide their excitement immediately he got the threshold.