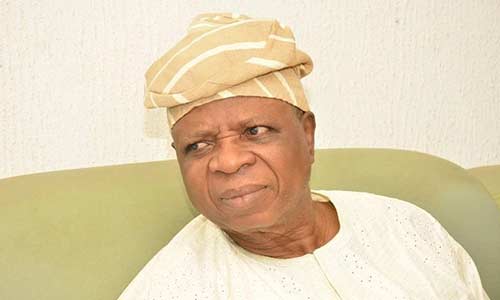 A former Minister of Transportation, Chief Ebenezer Babatope, speaks on the state of the nation, the need for power rotation in 2023, and other sundry issues in this interview with MUDIAGA AFFE.

You were recently quoted to have said that the APC would be fooling itself if they think the position of the party’s presidential candidate would be zoned to the South-West, why do you think so?

As a member of the BoT of the PDP, is this your position that of the party?

I cannot say where the party will pick its presidential candidate from, but what I have said should apply to all the political parties, whether the PDP or the APC. Having said that, the party is supreme, whatever they decide is what I as a loyal party man will go with.

So, are there plans to dump the presidential candidate of the 2019 election, Alhaji Atiku Abubakar?

I have not heard that, but do not forget that these zoning of positions terminates with one particular election. So, Atiku Abubakar was the PDP presidential candidate, a nice candidate, but then, the PDP may think otherwise when thinking in terms of how to win the next election. It does not mean that once you are a candidate you will remain so for life, no.

The PDP is currently battling with some internal crisis. There is the case of Lagos where party executives dragged the NWC to court over the election and the party still went ahead to conduct the election, what is your take on that?

If the committee set up by the NWC to conduct a special election in Lagos PDP went ahead, then they would have caused a major crisis for the party because there was a court injunction that restrained them from doing that. It will be very unfortunate. If a court has given an order and they went ahead to disobey it, then what is the basis of all our grievances against the APC-led Federal Government? Well, I pray for the party because this is where I belong. If they have conducted that election I can assure you that a major crisis has been opened. The same thing in Osun State where some people wrote a petition against the state chairman of the party and the National Working Committee decided to set up a committee to investigate the matter. As far as I am concerned, we from Osun State, we are doing everything within our power to ensure that we take our state back to the PDP, but we must know that the APC is not a pushover party. I am one of the greatest critics of the APC because I do not believe in them but it is not a pushover party. The PDP NWC must be very careful not to throw the party into a major crisis. If they do so then they would have prepared the ground open for perpetual domination of the Nigerian polity by the APC.

So, where is the PDP heading to in 2023 if they continue this way?

I hope that the Chairman of the party, Uche Secondus, will be able to arrest the situation. I respect the chairman but there is a mistake already being made in the National Assembly at the moment. The House of Representatives has elected their minority leader, the issue should be resolved without throwing the party into chaos. It is a pity and I believe that Secondus should do something about it. Otherwise, the party will be facing a major crisis and will be throwing it open for the APC to dominate the Nigerian political space for a long time.

Why did the Federal Government not develop the rail sector when you were Minister of Transportation?

When I was Minister of Transportation and Aviation under the regime of late Gen Sani Abacha, we made a proposal that the East-West railway line should pass through Lagos to Oshogbo, Ilesha, Akure, Benin and from there to the South-East. But when we left office, the idea died and there was nothing we could do about it and the succeeding government just threw it away. We have always said that the success of transportation in Nigeria will be dependent on the attitude of the government of the day. For a long time, those into haulage business have succeeded in damaging all the roads in Nigeria but this would not have been possible if we had functional rail lines. Effective railway services will address the problem of transportation in the country. The ongoing construction of the Lagos, Abeokuta, and Ibadan rail line will be good for the country. We should have a rail line that is properly constructed. When the late Pa Obafemi Awolowo was contesting presidential election, one of the things he promised Nigerians was that he was going to construct rail lines from the East to the West and from the West to the North, but unfortunately, he did not emerge winner and the dream died.

You are a staunch member of the PDP that took over power from the military government. Are you not disappointed that the party did not implement that dream?

I was not in government then but I know that the PDP government did its best under the government of Olusegun Obasanjo. No government can be completely perfect but all I know is that government is a continuum. We are now under the APC, let the party in government go and prove its mettle. They say they are doing rail line now, let them do it very well. I am told that the one running from Kaduna to Abuja is running well, let them improve on that. They should encircle Nigeria with proper rail lines construction and once they do that our problem will be solved. It will even address the issue of banditry, kidnapping and other criminalities going on on our highways. I have always had belief in the country because I was trained by one of the best pan-African leaders – the late Chief Obafemi Awolowo. I want to tell the government of the day to do its best to ensure that the problem of hunger and insecurity is solved.

There was a report that was credited to you that you regretted serving in the Abacha military regime. How true is that?

I never said that. It will be a stupid quote coming from me. Why should I regret serving my nation, I have never regretted it. I have written books about the Abacha regime and the June 12 crisis. I do not regret serving the country in that government and will never do. Apart from that, I am a hard core Christian and I believe that whatever happens to a man from God Almighty happens to him for his good. God put me there. I did not put myself there. During that period, the Awolowo group in the South-West met and gave the go-ahead that we should go and serve. They told Alhaji Lateef Jakande, Mrs Mobolaji Osomo, the late Chief Olu Onagoruwa, Elder Wole Oyelese and I to go and serve in that government and we did. I have never regretted it and will never do it.

The Minister of Works and Housing, Babatunde Fashola, was recently quoted to have said that Nigeria roads are not as bad as they portray it. Do you agree with him?

Babatunde Fashola is a young man that I like, however, I do not agree with him on that. We all know for instance that the whole of the South-East roads is bad. I have gone to all parts of this country and the eastern roads have been bad for a long time. It was recently reported that the government is trying to fix the Owerri-Onitsha highway. What about the Onitsha Enugu road? Which is also very bad? It is only in the northern part of the country that you have some roads that are still fairly good, but roads in the South-East are bad. Also, some major roads in the South-West are bad, so, I do not agree with Fashola on this.

As a Nigerian, what is your assessment of the state of the nation under the President Muhammadu Buhari-led administration?

It is a pity that the President and I belong to the same age bracket. He will be 77 very soon and I too, so, I have that sentimental attachment because we probably belong to the same generation. But as regards what is happening in the country, oh my God, the APC government has not done well at all. There is hunger is the land and people are very hungry. Most people can hardly afford two square meals in a day, let alone three. In addition to that, there are security issues and Nigerians are afraid to move from one place to the other for fear of being kidnapped. We must address all these problems and I have the belief that the problems can be solved.

What is your assessment of this administration’s adherence to the rule of law? There are some persons, like Omoyele Sowore, and others that are being detained despite court orders asking the federal government to release them?

I feel very bad about the case of Sowore and many others that are still being kept despite court orders for their release because I have passed through it. I have been detained thrice in this country. Under Gen Buhari as military head of state, I spent 20 months in prison. It is dangerous for human health to be held against his will. The court has ordered the release of Sowore and somebody is still keeping him, for what reason? Which revolution was Sowore leading now that you are holding him? A court has ruled on the matter and they are still keeping him. Look at the cases of Al Zakzaky and Sambo Dasuki. Apart from Buhari, who is the head of the government, we should tell the Attorney-General and Minister of Justice, Mr Abubakar Malami, that he is not doing well because under him courts have given judgments and the rulings are being ridiculed. He must stand up and do something. This is total mockery and destruction of the tenets of democracy.

What is your interpretation of the Court of Appeal ruling which set aside the tribunal judgment that upheld the Oyo State Governor Seyi Makinde’s election last month?

The Nigerian judiciary must be honest with itself. It is going to be a mockery of justice if anybody comes out to say that Seyi Makinde, the governor of Oyo State, has been removed. The man won in 31 Local Government Areas out of 33. So, what are they saying? Seyi Makinde is the governor by the grace of God and the judiciary has asserted that. All they have done is the fact that Makinde’s governorship is affirmed by law- that is all. Anybody giving any other interpretation is deceiving himself.