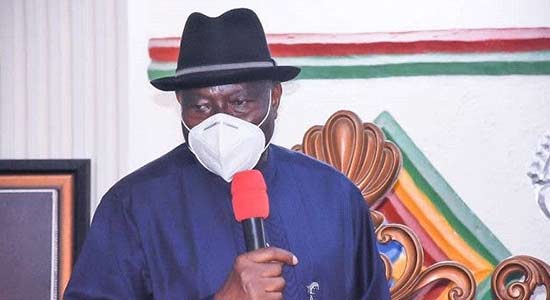 Former President Goodluck Jonathan yesterday attributed Nigeria’s failure to properly manage its diversity and continuing inability to give ethnic and religious minorities their proper place in the country as part of the reasons for disenchantment in the polity.

The former president, in his address at the 13th Joe-Kyari Gadzama Public Lecture said aside from the South-west, no other area in the country has been able to balance religion and development.

“That is the only part of Nigeria where we feel has been able to manage religion and development very well. So, we must look at our own unique circumstances and come up with the right form of government,” he said.

His address during the event, which held both virtually and physically in Abuja, was titled: “Redefining Democracy: Yearnings of the Minority in a Democratic Setting.”

Jonathan stated that he decided to honour the invitation to speak on the state of the nation, despite the likely misinterpretation of his treatise, out of his respect for the host, Mr. Joe-Kyari Gadzama (SAN), and because a society that does not respect the rule of law would breed anarchy where life becomes nasty, brutish and short, making real progress difficult.

According to him, in Nigeria, the complications associated with the marginalisation of minority groups and tribes were identified many years ago and efforts have been made across generations to solve the problems, including the Willinks Commission set up during the colonial era.

He added that although the Federal Character Commission (FCC) is a product of such efforts, it has not fully rectified the anomalies, having been tailored to deal with mainly the civil service.

Jonathan said: “The Federal Character Commission over many decades may have been doing its best to give everyone fair representation and a fair sense of belonging, but there are still many who feel that this agency of government has not fully addressed the challenges of accommodating minorities.

“This is because it has managed to pursue with varying degrees of success emphasis on the civil service. However, many are of the opinion that it does not really go far enough, since it currently does not address inequalities in political appointments into sensitive areas such as the military and public sector appointments.”

He stated that Nigeria now faces the challenge of managing diversity and minority interests, and even in the parliament, it has been struggling with the task of accommodating disadvantaged groups like women and people with disability.

He traced the country’s problems to its foundation, saying that the growing dissent cannot be divorced from the country’s failure to manage its differences and play down on its fault lines.

“From the independence and post-independence crisis, the coups and the counter-coups and the different republics to date, the swelling disenchantment is the fallout of our inability to manage our diversity and downplay our differences. It is obvious that calls for fragmentation seem to be getting louder among some segments of our nation.

“This is because we have not been able to positively harness and harmonise our enviable size and the ingenuity of our people and project our greatness,” he stated.

But beyond the grandstanding from some quarters, the former president stated that Nigeria needs to unite and face the problems that have been holding it down, further pinning it down to “a failure to properly manage our diversity and harness our potential.”

For a multi-ethnic country to make progress, Jonathan said that there must be a conscious effort to give a democratic sense of fairness, equity and justice and guarantee minority groups access to the political space.

He added that the refrain that Nigeria is potentially great was going out of tune, as the younger people had begun to query whether Nigeria will ever operate within its full capacity.

“By now, we should be running an advanced economy and the social system and standard services that support that economy just like other nations like Singapore or Malaysia and the United Arab Emirates who share the same political and economic evolution with us. However, we are lagging behind so far away from them.

“The stories of these countries clearly confirm that the journey to the transformation of a nation does not take a lifetime. That Nigeria still remains potentially great after over 60 years of independence shows that there are fundamental lessons in the political evolution of our nation that we have not really learnt,” he said.

According to him, although there is a school of thought which blames the country’s colonial experience for its seeming backwardness, while the proposition may have some element of truth, Nigeria was not the only country that was colonised.

He said a second school of thought blamed the huge size of the nation, describing it as the dilemma of the whale, which is feared for its weight, and yet dies by its weight.

He added: “I share the sentiments of many political commentators that at the crux of our challenge of national transformation is the problem of our political and governance structures and the inability to harness our diversity towards shared prosperity.

“I believe that from independence, the political evolution of leadership in Nigeria has been too concentrated along tribal and religious lines and that is still haunting us today.”

He said it was the reason he conveyed a national conference in 2014 which sought to look at the political leadership structure, saying that the nation is currently trapped in the dilemma of an “imperceptible giant” that needs to work harder to realise it’s destiny.

He said what many countries might be doing better than Nigeria was that they had developed systems and institutions that ensured that the political recruitment process offered a space for all, including the minorities.

“Where the minority feels that they are not relevant, there’s always the tendency to fulfil their destiny with a different approach. This is the beginning of the unending agitations and resistance movements across the world,” he added.

He decried the winner-takes-all approach to politics, stressing that enough space must be created for those who may be at a disadvantage, a situation that has fuelled the practice of cross-carpeting in the country because there’s usually nothing for the loser.

He also stated that bestowing maximum powers on one individual may not be the right form of government.

According to Jonathan, the inequity in the polity runs from the federal to states to local governments and even in wards where certain minorities can never dream of becoming top leaders because of their areas of origin.

“Looking to the future, I can say that our leaders can do a lot more to eliminate ethnic sentiments in our society, enthrone merit and build a system that gives citizens equal opportunities to excel.

“There has to be a united, strong and cohesive Nigerian nation of patriotic citizens for any structure or system to yield the promise of our shared prosperity,” he added.

Earlier, Gadzama, who praised Jonathan for averting bloodshed by handing over peacefully to his successor had said that in every democracy, majority rule was endorsed and guided by the constitution, which also protects the rights of the minorities.

He stated that the participation of persons belonging to the minority in public affairs and in all aspects of the political are essential to preserving their identity as a minority.

He added that democracy is likely to develop and endure when all members of society are free to participate and influence political outcomes.

Aside from Jonathan, other dignitaries at the event included the National President of the Nigerian Bar Association (NBA), Mr. Olumide Akpata; Minister of the Federal Capital Territory (FCT), Alhaji Mohammed Bello; Chairman, House Committee on Judiciary, Mr. Onofiok Luke, former Attorney-General of the Federation and Minister of Justice, Mr. Mohammed Adoke (SAN) and members of the diplomatic corps.