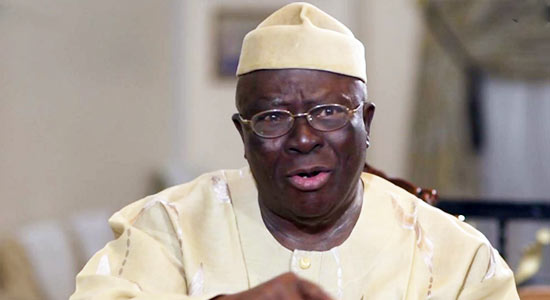 The leader of the pan-Yoruba socio-political group, Afenifere, Chief Ayo Adebanjo, has maintained that it is the right of the Igbo ethnic nationality to produce the next president of Nigeria.

However, Adebanjo said the ruling All Progressives Congress (APC) had disqualified the Igbo by refusing to pick its presidential candidate from among them.

Adebanjo’s postulations came as a member of the Northern Elders Forum (NEF), Hakeem Baba-Ahmed, said the unity of Nigeria was negotiable among all the people that make up the country.

They both spoke at a public lecture organised by the Igbo socio-political organisation, Ohaneze Ndigbo, at the Nigerian Institute of International Affairs, Victoria Island, Lagos.

The lecture had the theme, “Nationalism and Nation Building in Nigerian History.” Elder statesman, Major General Atom Kpera, chaired it.

Adebanjo pointed out that what Nigeria needed to move forward was sincerity, equity and honesty, stating that living together should be on agreed terms.

Adebanjo, who spoke as a discussant, said, “When we say, go back to the Independence Constitution, it is simply saying there must be the autonomy of the regions, where each develops at its own pace.

“The case of the East is not about begging. It is the right of the East to produce the president. It is not because it is Igbo but because he is a Nigerian.”

He insisted that APC’s failure to choose an Igbo candidate from among them at their presidential convention meant they had disqualified the Igbo already.

On his part, Baba-Ahmed, who also spoke as a discussant, insisted that Nigeria’s unity was negotiable. He said it would be in the interest of the country to negotiate on the mode of engagement rather than allowing for disintegration.

He said, “Nigeria’s unity is negotiable. You either negotiate, because the nation is very fragile or they break and we are at the breaking point. Anyone who takes the unity of nations as non-negotiable is not talking about the human entity.

He noted that for the country to ensure peaceful co-existence, certain principles must be put in place, adding every part of the country is embroiled in several grievances.

Baba-Ahmed believed that the country was already operating on shared power.

“There is shared power between the political class and the masses,” he stated. We have been manipulated by the group of people, who control us,” Baba-Ahmed said.

Advising the South-east to speak with one voice and negotiate with other parts of the country if power would come to the zone, Baba-Ahmed alleged that the elite in the South-east were fragmented

In his remarks, President General of Ohaneze Ndigbo, Professor George Obiozor, said, “For Nigeria’s unity and nation-building to succeed, the leaders need to borrow a leaf from or emulate the experiences of countries that did not ignore the element of pluralism in their respective countries and societies.

“Nationalism, including ethnic nationalism, is not about to disappear in the world generally, and certainly not Nigeria, no matter how much we want to wish it away. It is still a potent force and all its advocates feel they have a strong case and believe that history is on their side.

“Without mincing words, the disparity between claims to nationhood and the political realities in Nigeria is responsible for the political instability, military coups, sporadic levels of warfare, cruses and violence that have characterised Nigeria’s history.”

The guest lecturer, Professor Akinjide Osuntokun, opined that the country needed to find a collective and equitable solution to the way it chose leaders.

According to him, “As a former ambassador of Nigeria, I am in favour of finding a solution to our constitutional and structural problems. I saw how our size, resources and population brought us respect abroad. I also know that, as the late President Nelson Mandela said, ‘until Nigeria is successful, no one will have respect for the black man’.

“What we need if this country is to succeed is to find a collective and equitable solution to the way we choose our government and put in place the administration of the country based on the French revolutionary credo of careers open to talents instead of the current nebulous federal character and the odious and rampant corruption ruining the country while the majority of our people vegetate in poverty and want.”