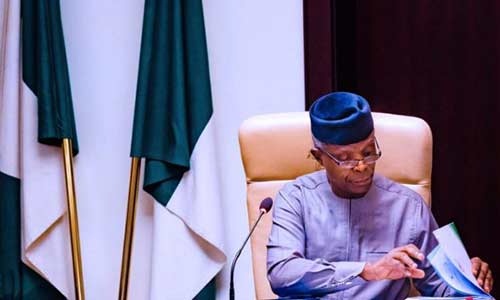 A Yenagoa based lawyer, Ebi Robert, has written an open letter to the Vice President of Nigeria, Prof. Yemi Osinbajo, over the state of the Nation.

In the letter dated the 6th day of December, 2019, Mr. Ebi Robert lamented the incessant cases of the violation of human rights, and the recent aggressive way Mr. Sowore Omoleye was arrested by the DSS.

He registered his worries over the situation as all these are happening under his watch as a master of the law.

Below reads the letter:

OPEN LETTER TO HIS EXCELLENCY, PROF. YEMI OSINBAJO, SAN, ON THE STATE OF THE NATION

Your Excellency, it is with sadness I write you this letter.

This is a letter that I would have written you long before now, but I decided to put a pause to it because at a point, I felt it was overtaken by events. However, as things keep on unfolding in the nation, I feel it is now expedient I write you this open letter. I hope this letter get to you. I will try to be as simple as I can be, and be brief as well.

I believe you are not unaware about the re-arrest of Sowore Omoleye in the face of the court, the most legal sanctuary of the law. I believe you must have watched the videos and read the headlines. I believe you must have, because with the wealth of knowledge at your disposal, you are someone who I believe loves to be updated at all time, not to talk of the fact that you are the number two citizen of our dear country who is open to constant briefings.

Your Excellency, Nigeria is now worse than a Banana Republic. Nigeria is now back to the pre-historic era which has been described as the era of “Might is Right”. While we are yet to be healed from the corruption that has eaten deep into the political system, public service and security system, we are fast becoming a totalitarian nation where the people who we elected to serve us are now our own monsters. The Rule of law is now second to a vague concept of National Security, when National Security itself should be defined by the Rule of Law. And under the guise of National Security, the ever sacred Fundamental Human Rights of Nigerians have been violated constantly without remorse. Accused persons are no longer presumed innocent. Court Orders are now treated with scorn, as security operatives disobey court orders at will. The government only obeys orders of court when it feels like, but disobeys them when it does not favour it. The court rooms have been rubbished. Judges are no longer accorded their due respect. Lawyers are beaten by Police officers for daring to defend the citizens, and nothing seems to be done to address this. Judges now live in fear. The once respected legal profession is no longer respected, as the court is now seen as a toothless bull dog that barks without biting.

Mr. Sowore Omoleye was arrested and detained over a declaration of revolution against the Government. The Court, however, granted him bail on some terms which was fulfilled. Nevertheless, the DSS refused releasing him as ordered by the court. On the rebuke and intervention of the Trial Judge, he was released, only for him to be re-arrested again in the face of the court. What show of disrespect! The usual argument would be that he was arrested on fresh charges. What a shame!

To cut the long story short, Your Excellency, all these unrighteous and unholy things are happening right in your days as the second in command. Why I write you is because you are a lawyer like me. You are not just a lawyer, you are a senior lawyer; not only so, you are a Senior Advocate of Nigeria. Your Excellency, as if that is not enough, you are a Professor of Law. To crown it all, you are a Pastor of the Christian faith. Your Excellency, your profile shows that you are a master of the law, one who is not ignorant of how it operates — one who is an authority of it. By this, you should be one of those who should protect the dignity of the legal profession; the dignity of all lawyers, the judges, and the ordinary citizens. But right under your watch, the rule of law has been despised and our nation is now sinking.

Mr. Osibanjo, wake up! The International Community is watching you. The legal profession is watching you, and above all, God is watching you. You have been made a watchman; if you fail to restore the sanity of this nation, God will hold you responsible. Mr. President, Muhammadu Buhari, may not appreciate or understand perfectly well, the beauty of the Rule of law, being a former military man, but you, Sir, as a master of the law is not and can never be ignorant, therefore, it is a shame that all these things are happening at your time as the Vice president of Nigeria.

Your Excellency, I charge you to wipe these tears in our eyes. Speak to Mr. President, our National father, to respect the Law and let the Rule of Law prevail. Maybe if he hears from you, he may understand. Africa depends on us; the whole world is watching us! Cure this madness, before Nigeria turns to a lawless Nation!

Remember, when the people are pushed too far, they may likely revolt, and when that time comes, even the government cannot stop them. I pray that would not happen.

I hope this is not HATE SPEECH.