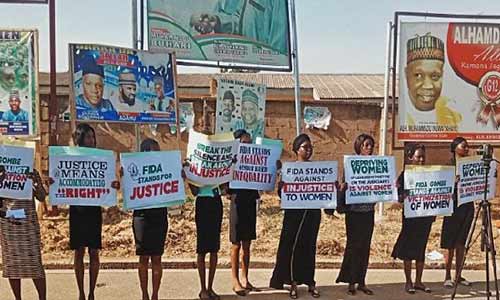 The Gombe State chapter of the International Federation of Women Lawyers (FIDA) has taken to the street to protest the removal and swearing-in of a new state acting Chief Judge (ACJ).

According to the state chairperson of the association, Elizabeth Jalo Okotie, the association was distress by news of the appointment and swearing-in of a new ACJ to replace the incumbent ACJ who had been due for confirmation as Chief Judge.

Speaking shortly after the swearing-in ceremony, Governor Yahaya stated that the appointment of Justice Pindiga, who was the next most senior judge in the high court of justice, as the new acting Chief Judge of the state, was compelled by the expiration of the constitutional term of the acting CJ.

While thanking the former ACJ for her brief and meritorious service to the state, the Governor wished her well in her future judicial services and congratulated the newly sworn-in ACJ, charging him to dispense justice to all and sundry without discrimination, fear or favour.

However, FIDA chairperson Okotie expressed anger over the new appointment, describing the swearing-in of the new ACJ as a breach of section 271, sub-section 4 of the 1999 Constitution, which provides that the Governor can only swear-in a new ACJ if the seat is vacant or the incumbent ACJ is not able to perform.

The chairperson, who led the group of the protesters to the Government House gate, told reporters that the rule of professional ethics provides that there is seniority at the bar.

“Even an hour is very important,” said the aggrieved chairperson. “So, if another CJ is there, there is no reason why the Governor should go against the rule to bring in somebody from the back and impose him on the seating and most senior CJ. That is why we are here to register our protest against a flagrant disobedience to the constitution and rule of professional ethics.”

While admitting that the association was not aware of the reasons behind the action of the Governor, the chairperson demanded that he come out and explain the removal of the female judge.

“And there no allegation over her that she has not been able to perform,” Okotie said.

She added that the association will follow the matter in a legal way to ensure justice and respect for the rule of law.