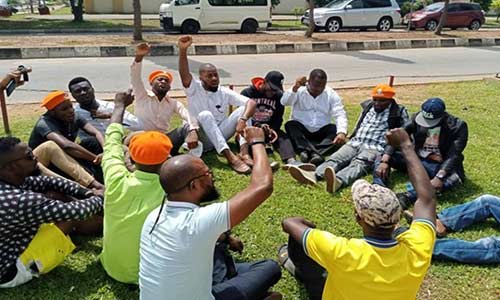 A protest broke out at the headquarters of the Department of State Services (DSS) on Saturday over the continued detention of Omoyele Sowore, convener of RevolutionNow Movement.

They sais its weekend. If there is a suspension of the rule of law, then, there is no need for a Law School- #FreeSoworeNow Activists.

“How is it that the Government does not honour her own institution. The #DSS in its defence has stated that ‘no person has turned up at the DSS Office to take delivery of Sowore’ #FreeSoworeNow Activists,” said

Sowore was arrested in Lagos on August 3 and subsequently flown to Abuja where he is being detained.

Last month, a federal high court in Abuja granted him bail but the secret police refused to release him despite fulfilling the bail condition.

On Friday, Peter Afunanya, spokesman of the secret police, acknowledged that the agency had received the order to release Sowore but said the service had not released him because no one showed up on his behalf.

However, on Saturday morning, lawyers, supporters and family members of the activist visited the DSS headquarters but were denied access to Sowore.

Some operatives of the agency said they had not got clearance to allow Sowore leave.

This infuriated some of his supporters who vowed to occupy DSS office till the activist is released.

After waiting for over three hours, some lawyers of the activist left the DSS headquarters.