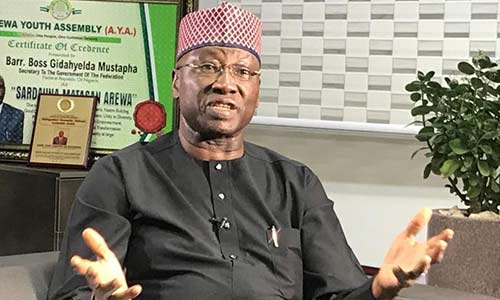 The Secretary of the Government of the Federation (SGF), Mr. Boss Mustapha, has declared that the Finance Act 2019, which was recently signed into law by President Muhammadu Buhari, would reduce public borrowings by the three tiers of governments in Nigeria.

Mustapha disclosed that funding gaps between government expenditures, especially in the execution of desperately needed capital projects across the length of the country, forced the hands of government to borrow in recent times.

He dropped this hint when he presented letter of appointments to newly inaugurated board of Federal Inland Revenue Service (FIRS) in his office. The board members were led by

He assured the newly inaugurated board, which was led to his office by the Executive Chairman of FIRS, Mr. Mohammed M. Nami, of President Buhari’s support and confidence in them to deliver an effective implementation of the Finance Act.

The SGF was confident that the new Finance Act would generate higher revenue despite the generous tax exemptions, reliefs and holidays granted to millions of working Nigerians and Micro, Small and Medium Enterprises (MSMEs).

A statement made available to the media in Abuja by FIRS’s Director of Communications, Abdullahi Ismaila, said the SGF urged the chairman and his board members to be proactive in their tax collection drive under the 2019 Finance Law.

He also emphasised that the federal government “needs all the money it can get to enable Mr. President to deliver on his mandate.”

The SGF also revealed that the government has directed its officials, particularly ministers, to reduce the number of aides who travel with them as one of the ways of reducing cost of governance.

Responding to the SGF remarks, Nami said the newly inaugurated board would need the support of everyone to be able to deliver on his mandate by not only meeting the target but also exceeding it. He added that he and his team would work very hard to justify the confidence reposed in them.