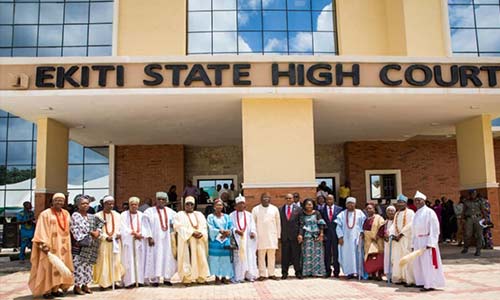 The complex, commissioned by former Governor Ayo Fayose in May 2018, could not be put to use by the Judiciary because of some structural defects.

Governor Fayemi, however, promised to construct an annex which would cater for the deficiencies, including a library facility that is missing in the new structure.

“This court has an interesting history because man proposes God disposes of. I recall during that first missionary journey, there was an elaborate plan for a High court building and the Chief Judge, his brother and sister judges, as well as members of my administration, extensively debated the proposed complex.

“The most important thing is that the building is ready and we must commend our past governor and his government for putting this edifice up for the State Judiciary.

Now that the building is there and ready for use, I know that we certainly do not have seven judges in Ekiti. We have at the moment eleven. I believe in the course of our administration, we shall attend to these additional requirements by God’s grace.

What is important is to ensure that the ordinary citizens in our state don’t have problems accessing justice both in the physical structure and the capacity of our judicial officers to dispense justice”, the governor said.

In his dedication speech, the Chief Judge, Justice Daramola explained that the Judiciary was confronted with a lot of challenges which prevented it from making use of the complex since it was commissioned by Fayose last year.

The Chief Judge added that he did not hate the former governor for publicly saying that the High Court complex was “a hybrid of absurdity” but he spoke the truth because he knew that the structure could not “properly and comfortably function as courthouse as it was not designed for that purpose nor was it designed for administrative purposes.”