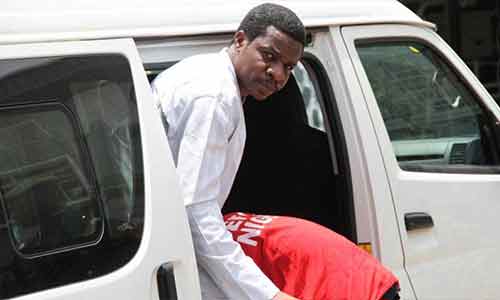 former Nigeria Airspace Management Agency (NAMA) Managing Director Ibrahim Abdulsalam has told the Federal High Court in Lagos that an extra-judicial statement he wrote at the Economic and Financial Crimes Commission (EFCC) office was not was voluntary.

He said an EFCC operative dictated what to write to him.

Abdulsalam said the commission’s armed operatives harassed his family while he was in custody.

He claimed that he was so traumatised by the experience that he wrote the statement on “auto-pilot” in the circumstance “so they can leave my family alone”.

But, the prosecution denied the allegations, insisting that Abdulsalam made his statement without any form of coercion.

The former NAMA chief was testifying in a trial-within-trial to determine the voluntariness of one of his statements.

They were charged with stealing and conversion of NAMA’s funds amounting to N2.8 billion.

The accused pleaded not guilty.

Testifying in the trial-within-trial on Friday, Abdulsalam said: “I am a safety electronics engineer. I was the MD/CEO of NAMA. I was arrested on February 12, 2016. I was in EFCC custody for about 55 days.

“On March 6, 2016, my family had to move from where I worked to my sister-in-law’s house in Abesan, Lagos. My house was raided that day and my family was threatened. That became very troubling for me.

“While in detention, an operative called Nuradeen Jamiu took me to a mosque at the detention centre on Okotie-Eboh Street and told me to write whatever I was required to write.

“Nuradeen later took me to one of the offices and started telling me what to write. He told me they had evidence and that I should be acknowledging what they were telling me. I wrote as he was asking me to write.

“They were harassing my family. The only thing I could do was to do what they wanted so they could leave my family alone. I was so traumatised the day I wrote the statement. I was on auto-pilot.”

Under cross-examination by prosecuting counsel Rotimi Oyedepo, the accused said he did not sue EFCC for any rights violation nor file a formal complaint to the EFCC acting Chairman.

The former NAMA chief said he did not have any documentary evidence that it was EFCC operatives who went to his in-law’s home to harass his family.

He admitted that he was granted administrative bail the day he arrived the commission.

Abdulsalam insisted that his family told him that the operatives who went to his in-law’s house “went with guns and they (family members) were not given an opportunity to ask questions”.

Jamiu, who earlier testified for the prosecution, said Abdulsalam was not forced to write the statement.

“We did not intimidate, cajole or force him to write the statement,” he said.

The operative added that the defendant was also not forced to answer questions he did not wish to answer.

“In some instances, the defendants even refused to answer some questions,” Jamiu said.

EFCC said on August 19, 2013, the defendants, with intent to defraud, conspired amongst themselves to induce NAMA to deliver N2,847,523,975.00 to Delosa Limited, Air Sea Delivery Limited and Sea Schedules Systems Limited under the pretence that the money represented the cost of clearing NAMA’s consignments.

Also, the court heard that one of the defendants was holding plea bargain talks with the prosecution.

Justice Kuewumi adjourned till October 3 for adoption of written addresses in the trial-within-trial.