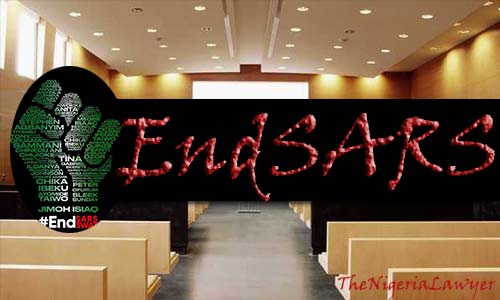 On 20th October, 2020, an incident of significance proportion happened at the Lekki Toll Gate. Prior to that date, some youths congregated at the venue to protest against police brutality. Their demand: End SARS. SARS is an acronym for Special Anti-Robbery Squad. On the said day, soldiers and policemen were alleged to have invaded the peaceful venue and killed some of the protesters. The Lagos State Government reacted by setting up a Panel of Inquiry headed by a Retired Judge of the High Court of Lagos State and eminent Nigerians including a Senior Advocate and a Retired Deputy Inspector General of Police. It was a formidable team.

After a year of sitting and receiving evidences, the Panel turned in its report and found that a massacre took place on the fateful night. As usual, the report has generated heated debate and comments which was further fuelled by Lagos State White Paper that rejected some of the Panel’s findings and recommendations.

The questions we intend to answer in this article do not relate to the accuracy and correctness of the findings of the Panel but on two critical issues to wit: whether a Tribunal of Inquiry set up by Lagos State Government can validly investigate acts of the Armed Forces of the Federation whose Commander-in-Chief is the President and two, whether Lagos State Government can reject some or all the recommendations of the said Judicial Panel.

It must be stated straight away that constitutional issues must be approached not only with the moment in mind, we must not loose sight of the future too. As such, our view must not only address now, it must consider future development. Edward v Canada (1932) AC 124.

Nigeria is a Constitutional democracy and powers and obligations are constitutionally conferred on the Federal and State Government. This is where the issue of Exclusive, Concurrent and Residual lists came up. It is submitted that matter of defence and security are matters exclusively within the constitutional purview of the Federal Government of Nigeria. We refer to Nos. 2, 17, 38 and 45 of the Exclusive Legislative List of the 2nd Schedule of the Constitution of the Federal Republic of Nigeria. This puts it beyond doubt that the command and control and discipline of the Armed Forces is constitutionally vested in the President who is the Commander-in-Chief by virtue of Section 217 of the Constitution.

We have read argument that the Supreme Court in the case of Fawehinmi v Babangida (2003) 3 NWLR (pt. 808) 604 that the Federal Government cannot set up a Tribunal of Inquiry except for the Federal Capital Territory. It is strange that the lawyers who stood against that judgment during Oputa Panel are now employing the judgment because it suits a narrow perspective. The answer is that to investigate and discipline members of its Armed Forces, the Federal Government does not require a Tribunal of Inquiry. A cursory perusal of the Armed Forces Act and the Constitution show that the Armed Forces as a discipline force has adequate provisions for maintaining standard and discipline its members that err.

It is therefore not correct that since the Federal Government cannot set up a Panel of Inquiry except for the Federal Capital, that power is now to be exercised by the State Governments.

It is at this stage apt to consider the law that set up the Hon. Justice D. Okwuobi’s Panel. It was set up under the Tribunal of Inquiry Law of Lagos State.

Section 1 of the Law provides:

The Governor may when necessary, constitute one or more persons by a signed instrument, a Tribunal with authority to inquire into the conduct or affairs of any officer in the public service of the State, or any officer in a local authority in the State, or of any chief or the management of any department of the public service or of any local authority or declarations of customary law relating to the selection of an Oba or a recognised chief or any matter relating to chieftaincy dispute, or into any matter in respect of which in his opinion would be for the public welfare.

We have set out the constituting authority in extenso so that there is no ambiguity. The first thing to note is that the Tribunal is to INQUIRE. That is the limit of its power. Secondly, the officers who can be investigated or be subject to an inquiry are officers in the employment of Lagos State and for matter involving customary law and Obaship. It is the law that words in an enactment be given their natural meaning. See AG Lagos v Eko Hotels (2006) All FWLR (pt. 342) page 1398. We have also read some people who having apprehended the limitation of the scope of powers of the Tribunal took refuge in the phrase – would be of public welfare. The proper interpretation of the phrase: public welfare cannot derogate from the preceding provisions. Public welfare here must align with the words previously mentioned. Having limited itself to matters within its public service and customary law, it would be absurd to interpret the word: Public Welfare to include the military and other security agencies. In statutory interpretation, this is known as Expressio Unius Est Exclusio Alterius”.

Also, it is also an acceptable interpretation that since the Constitution has placed the act, formation, posting, discipline of the Armed Forces under the Federal Government, no State can legally set up a panel to investigate the Armed Forces. Section 1(3) of the Constitution makes the Constitution supreme and any law that derogates from the constitution in invalid. Insofar as the Tribunal of Inquiry Law of Lagos State is being interpreted as capable of investigating the security agencies in Nigeria, that law will be unconstitutional. In our humble perusal of the Law, there is no provision therein that makes it valid for a Panel of Inquiry to investigate the Armed Forces. In actual sense, the Law recognises the limitation of the Governor’s power as it concerns the setting up of a Tribunal of Inquiry.

We refer to Section 21 of the Tribunal of Inquiry Law which provides as follows:

The powers conferred by this Law on the Governor, may be exercised in         respect of any matter within the legislative competence of the State.

It means that the Governor cannot direct the Tribunal to inquire into the conduct of the Armed Forces insofar as it pertains to the conduct of its officers on 20th October 2020. The fact that the Army appeared before the Panel would not constitute a waiver as the power and limit of authority of the Panel in statutory. After all, it is the law that parties cannot on their own confer jurisdiction on a Court.

Thirdly, the instrument and the Law setting up the Panel require it to make an inquiry – a finding of fact. Such a Panel of Inquiry cannot indict or punish and that explains why the Panel rightly made recommendations to the convening authority.

The other issue is whether Lagos State must accept the Panel’s recommendations without more. We have read several learned writers to the effect that White Paper is unconstitutional and that the Panel Recommendations are law unto themselves. This is also not correct. It may be necessary that we remind ourselves that our practices and procedures are inherited from our colonial master. It has never been the law that the Executive Branch must accept the recommendations and findings made by a Panel of Inquiry. The practice as inherited is for the Executive Branch to peruse and review the recommendations and findings of the Tribunal. It is that process that is referred to as issuance of White Paper which is the Government’s position on the matter.

Section 15(1 &2) of the Tribunal of Inquiry Law of Lagos State compel the Tribunal to furnish a full report of its proceedings, findings, recommendations and report to the Governor. Subsection 2 empowers the Governor – if he deems it necessary to do so- to make an order on matters dealt with by the Tribunal and same shall be registered as a judgment of the High Court.

As we have mentioned earlier, this article does not seek to take a position on the correctness and accuracy of the Tribunal’s findings, reports and recommendations. The two issues that agitate our minds are whether a Tribunal of Inquiry sets up by a State Government can validly investigate matters of defence and security; and whether the Governor of a State has power to accept or reject recommendations made by the Tribunal of Inquiry. The issues have been adequately addressed in this article.