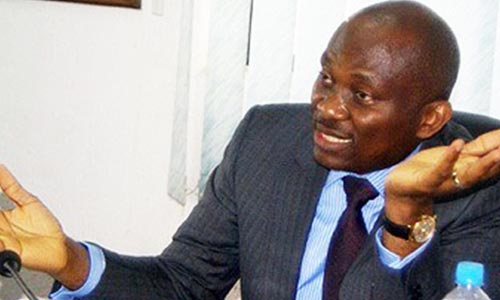 The Minority Leader of the House of Representatives, Ndudi Elumelu, has stated that his party, the Peoples Democratic Party cannot impose leaders of the minority caucus, saying it is against the Constitution and the rules of the legislative chamber.

Elumelu also stated that he and other leaders of the House minority caucus remain loyal to the PDP.

The Minority Leader made this known in a statement issued in Abuja on Saturday by his Special Adviser (Legal), Oyorima Idahosa.

The statement partly read, “The attention of the leadership of the minority caucus of the House under Hon Ndudi Elumelu has been drawn to allegations of disloyalty levelled against it in a statement issued by the National Publicity Secretary of the PDP on Friday.

“This is completely against the principle of democracy, rule of law and fairness upon which our great party, the PDP, is founded and known since its formation 21 years ago.

“For the avoidance of doubt, the minority leadership of the House was elected in strict observance of Section 60 of the 1999 Constitution (as amended) and Order 7 Rule 8 of the Standing Rule of the House of Representatives.

“This, the overwhelming majority of the minority caucus, comprising nine political parties – PDP, APGA, ADC, LP, SDP, PRP, AA, APM, ADP – did and communicated their decision to the Speaker in a letter dated 2nd July 2019 and signed by over 100 members of the 147-member caucus.”

Elumelu stated that by parliamentary rules, persons so elected become the leaders of the party caucuses in the legislature.

He said, “While the party can guide their elected members through the zoning of various minority leadership offices, it is not in the place of the party, by the provisions of the Constitution, House Standing Rules and parliamentary traditions, to appoint or foist minority or majority caucus leadership on its members.”