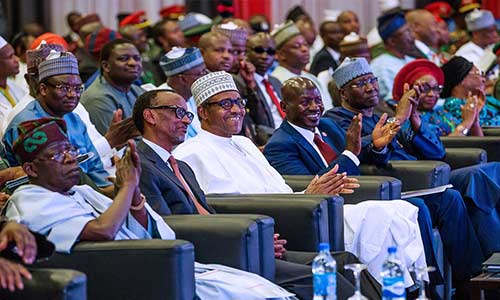 President Muhammadu Buhari on Tuesday listed eight priorities he will give more attention to give his anti-corruption agenda a big bite in the next four years.

He also said the governments will soon device new strategies to win the war.

He said he will press for a crackdown on safe havens for corrupt assets, abolition of bank secrecy jurisdictions and tax havens on the continent and beyond.

He also said he will push for unconditional return of looted assets kept abroad and strengthen international.

He however insisted that uncontrolled electoral spending and voter inducement by politicians must be combated.

Buhari bared his mind in an address at the National Democracy Day Anti-Corruption Summit in Abuja, which was organized by the Economic and Financial Crimes Commission (EFCC).

The theme for the summit was “Curbing electoral spending: A panacea for public corruption”.

He said it was regrettable that Thabo Mbeki Panel on illicit financial flows, published a few years ago, claimed that Africa has lost over $1 trillion to corruption over the last 50 years.

He said: “During the recently concluded election campaigns, I stated clearly that the major areas of priority during my second term in office as it was in my first term will be: Security, economic improvement and fight against corruption. I remain committed to the fulfillment of these promises.

“Now, as this administration commences, we are taking stock of progress made so far in the war against corruption, assessing what needs to be done and devising new strategies to address existing challenges.

“I am pleased to inform you that this process has already started with the recent interaction between the Presidential Advisory Committee against Corruption and all anti-corruption agencies in Nigeria.

“The outcome of the interaction, among others, shall serve as the basis for a more concerted effort by this administration to:

· Strengthen the capacity of the Economic and Financial Crimes Commission and other anti-corruption agencies by providing additional material, organizational and logistical support;

· Ensure comprehensive support and protection to whistleblowers, witnesses and victims of corruption;

· Adopt and formulate the policy of ‘naming and shaming’ all those who engage in corrupt practices while encouraging and honoring those who do not;

· Educate, mobilise and encourage Nigerians at the grassroots level to take ownership of the fight against corruption;

· Press for a crackdown on safe havens for corrupt assets, abolishing of bank secrecy jurisdictions and tax havens on the continent and beyond;

· Insist on the unconditional return of looted assets kept abroad and further strengthening of international cooperation through information and mutual legal assistance.

Buhari urged Nigerians to join the fight against corruption to restore sanity to our system.

“We must henceforth see the anti-corruption fight not to end in itself but as an instrument not only to fight poverty but a means to restore the right order of things.

“As we work to integrate these outlined measures and others into the anti-corruption drive with renewed vigour, we look forward to the active support and cooperation of all,” he added.

The President also said it was time to de-commercialise Nigerian politics.

He said: “Regrettably, the recent political experiences have been characterized by the corrupting influence of money on party politics and electioneering processes.

“This unwholesome practice has dire consequences on our nations, in subverting the exercise of free choice by voters, elevated corrupt and unprincipled individuals to positions of leadership and entrenching the structures of democracy devoid of accountability.

“Electoral spending manifests in different forms and so should the approaches to curb it. That is the way to de-commercialize the political process so that true democracy can survive and thrive.

“Of course, we have sufficient legal framework in place in Nigeria to combat reckless electoral spending.

‘’The provision of Section 90 of the Electoral Act, 2010 (As Amended) explicitly puts a cap on the amount candidates for different political offices must expend on elections, failing which they are violating the law.

“Of greater significance is the provision of section 88 of the Act which prohibits a political party in Nigeria from ‘possessing any fund outside or retaining funds or other assets remitted to it from outside Nigeria’.

“The philosophical underpinning of the above provisions and other related provisions of the Act is to prevent desperate politicians from buying their ways into political offices at the expense of low – spending law-abiding individuals.”

He pleaded political corruption is merely an extension of larger corruption in the wider society.

He said voter inducement by politicians must be combated.