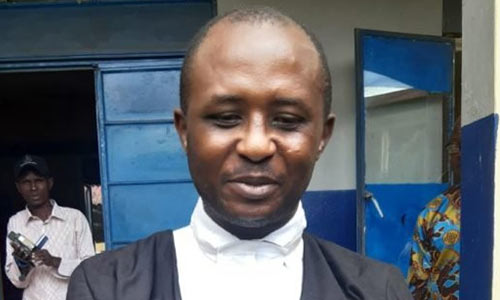 Police in Edo State has arrested a housewife who used the military camouflage of her late husband who was a soldier to defraud and carry out illegal businesses for unsuspecting members of the public.

The fake soldier, identified as Angela Maidoki, was arrested by officers of 4 Brigade Command of the Nigeria Army in Benin the state capital.

Also paraded by the state command was 42-year-old Uchenna Duru, who allegedly posed as a fake lawyer to the Benin zonal office of the Economic and Financial Crimes Commission (EFCC) and for defrauding unsuspecting members of the public.

Duru was arrested following a petition by one Mrs. Abdulahi Ruth of Air Force Primary School Road in Benin for allegedly defrauding her of an undisclosed sum of money and stealing her Toyota Camry 2.4 model saloon car with registration number GU 514 LV.

During the investigation, one Madam Adams Dora was nabbed in the process, though she denied any involvement in the case but alleged that Duru had fraudulently obtained N1 million and an additional N1.5 million to buy one RAV 4 jeep with the promise he would marry her on December 2918.

He was arrested with one black Lexus RX SUV, lawyer’s identity card bearing his name and other attires belonging to lawyers.

Also, one Faith Eriamiatoe had come forward and alleged that Uchenna Duru introduced himself to her as a lawyer with the EFCC in Benin City and defrauded her of N73, 000 with the pretence of helping her to buy auctioned rice from the Nigerian Customs Service in the state.

However, Angela was arrested in Benin while wearing military camouflage uniforms to escort alleged smuggled vehicles.

Police Public Relations Officer of the command, DSP Chidi Nwabuzor, who paraded the suspect, said she would soon be charged to court.