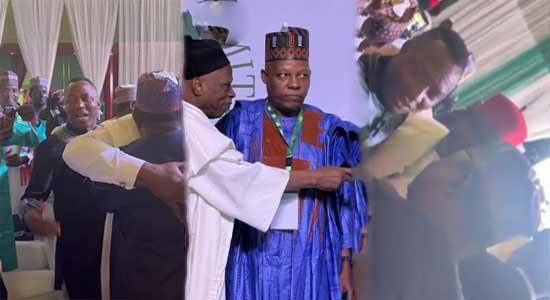 The drama played out at the signing of the ‘first National Peace Accord by political parties and presidential candidates of the 2023 general elections’ organised by the National Peace Committee (NPC).

It was noticed that Sowore was asked to move to a second row by ushers at the event, leading to his protest that he was entitled to the first row like any other presidential candidates.

He also said that of Shettima, who was only representing Tinubu can sit in front, why would he that he is a candidate cannot.

“It is the same position that I have with people sitting in the front. I confronted him (Shettima) why was he sitting here, when Tinubu was not here. If I was sitting there, I would not stand up for him. Because Tinubu is the one who is supposed to be here. You can’t be running for Nigeria’s presidency in absentia,” Sowore said.

In another encounter, Sowore was heard exchanging words with Al-Mustapha, over the latter’s role during the regime of late Head of State, Gen. Sani Abacha.

“You are not where I was yesterday. Between realism and truth are two different words. I stood by what I did yesterday and tomorrow. That does not matter,” Al-Mustapha said amidst the conversation.

Sowore on his part, said, “With what you did in our lives, you and Abacha. It does not matter. I am part of the truth. Is the same truth I stood for because I was a student union leader when you guys were rampaging the country. It does matter.”