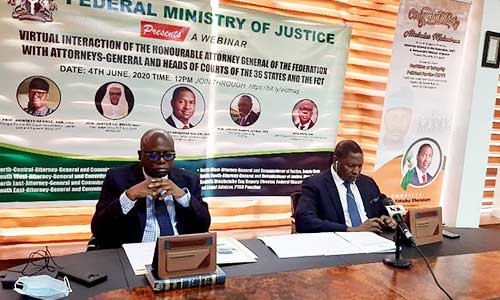 Attorney-General of the Federation and Minister of Justice, Abubakar Malami, SAN has on Thursday hosted webinar/virtual interactive session with Attorneys-General and Heads of Court of the 36 States and the Federal Capital Territory.

This is contained in a statement issued by Dr. Umar Jibrilu Gwandu, Special Assistant on Media and Public Relations Office of the Attorney-General of the Federation and Minister of Justice, which was made available to TheNigeriaLawyer(TNL) on Thursday 4th day of June, 2020.

In his keynote address at the session, Malami noted that in order to respond to the challenges posed by the pandemic, the Ministry has improved on its ICT infrastructure to enable the Ministry carry out its duties.

“The Ministry has completed the establishment of ICT Studios and the deployment of Galaxy Backbone dedicated lines that will facilitate the prosecution of criminal cases as well as the defence of civil cases using the virtual platform”.

“As the biggest Law Chamber in Nigeria and if not in Africa, the Federal Ministry of Justice must continue to lead the process of innovation in the administration of justice. To complement this effort, the Nigerian Correctional Service is also being engaged on establishment of Studios in the Correctional Centres to make it possible for evidence of suspects in custody to be taken without their physical presence in court. This will ensure that the administration of justice is not disrupted,” he said.

Furthermore, he reiterated the desire to work with stakeholders to articulate a holistic response to the challenges posed by the COVID-19 pandemic to the administration of justice in the country.

Meanwhile, he noted that the purpose of the virtual meeting was to provide the platform for engagement and articulation of collective views on the issues arising from the COVID-19 pandemic and harmonise all resolutions in a bid to chart a way forward.

Besides, Malami said the advent of COVID-19 and the efforts to manage its spread and reduce the human and economic devastation occasioned by the pandemic, has made it imperative to adopt systems that will reduce the physical presence or involvement of persons in the judicial process through the deployment of technology to achieve the same objective for which physical presence was intended,” he said.

The Minister noted that the justice system is founded on the constitutional principle of fundamental rights to fair hearing that requires the court to hear and determine cases in public and the physical presence of the suspects or parties in court.

He noted that in view of the COVID-19 situation, it has become imperative for the Government to put in place, legislations and policies that will engender a justice system that promotes
social/physical distancing through the application of appropriate technologies in the dispensation of justice and the promotion of rule of law.

In addition, he used the opportunity to commend and appreciate the Heads of Court and Attorneys-General who have already started the process of deploying and applying virtual courtrooms and proceedings to promote social distancing and minimize the physical presence of court users.

However, he acknowledged that there have been arguments as to whether the application of virtual court hearing meets the constitutional requirements of fair hearing.

“I am of the view that this meeting offers an opportunity for further discussion on the issue and a common position taken. This is without prejudice to the ongoing deliberations in the National Assembly to amend section 36(2) & (3) of the Constitution. As stakeholders, we have a duty to ensure that the pandemic is not allowed to ground the administration of justice machinery to a halt. We must continue to forge the needed synergy and collaboration to administer justice in the face of the pandemic and in line with global best practice”.

The Minister said concerted efforts are being made by the Federal Government to strengthen judicial and democratic institutions for the benefit of our people which he described as critical to the attainment of the anti-corruption drive of the current administration and the overall improvement in the administration of justice.

Malami disclosed that the Federal Government has constituted Committees on Implementation of Directive on Designated Corruption Prosecution Courts to actualize the directive of the Chief Justice of Nigeria to Heads of Courts to designate specific courts for the prosecution of all corruption-related cases with the aim of fast-tracking their completion.

In another development, he informed the participants that the Federal Government has established a Committee on the Review of Judicial Salaries and Conditions of Service principally to ensure that the welfare of judicial officers reflect current realities.