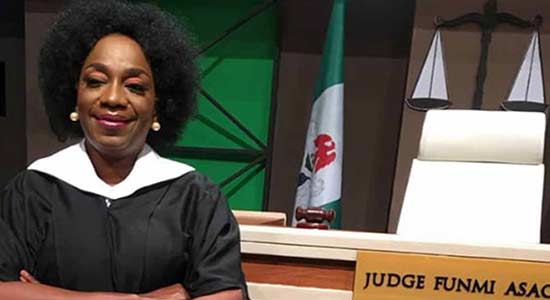 The presiding judge on the popular television programme, Justice Court, Justice Funmi Asaolu, has said that all the cases treated on the show are real and not doctored.

Speaking during the re-launch of the show, Asaolu said, “Nobody pays a dime to appear at the Justice Court or to have their cases treated on the programme. The complaints are real and are not doctored.

There are standard procedures for reporting cases to us. If the procedures are adhered to, a case will be heard in our courtroom.

In some cases, when we get complaints, we try to see if we can settle such cases outside the court, and we have been successful in that aspect too. Our judgments are binding on everyone involved in a case.”

The executive producer of the show, Victor Aluko, also noted that the show had been airing on national television channels for two years but it was important to re-launch it so that Nigerians could have a better understanding of what it is about. He said, “The show is an alternative dispute resolution court whose intention is to settle civil cases and other cases, thereby reducing the workload of the conventional courts.

Since the reality show started some years back, the acceptance level from people around the globe has been massive.” he stated.

Talking about his experience on the show, the programme director, Taiwo Aliu also said, “We don’t treat the show like a normal entertainment programme because of the legal issues involved. References can actually be made to our recordings, hence we make everything real with minimal editing.”