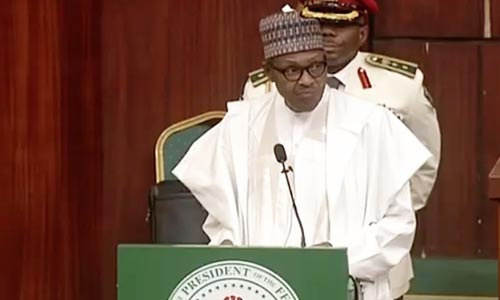 Firms making a turnover of N25 million and below will be exempted from payment of the Value Added Tax (VAT), President Muhammadu Buhari said on Tuesday.

He stated this while presenting his N10.33 trillion 2020 budget estimates to the joint sitting of the National Assembly in Abuja.

The Federal Government has raised VAT from five per cent to 7.5 per cent. It will take effect from January.

To validate the new VAT regime, the President submitted a bill along with the budget to the National Assembly.

The essence of the exemption, according to him, is to bring “relief for our micro, small and medium size businesses”, so that “revenue authorities can focus their compliance efforts on large businesses.”

The President said “the draft Finance Bill proposes an increase of the VAT rate from 5 per cent to 7.5 per cent. As such, the 2020 Appropriation Bill is based on this new VAT rate. The additional revenues will be used to fund health, education and infrastructure programmes. As the States and Local Governments are allocated 85 per cent of all VAT revenues, we expect to see greater quality and efficiency in their spending in these areas as well.

“The VAT Act already exempts pharmaceuticals, educational items, and basic commodities, which exemptions we are expanding under the Finance Bill, 2019.

This Finance Bill, he said, has five strategic objectives, in terms of achieving incremental, but necessary, changes to the country’s fiscal laws.

He listed the objectives of the proposed Finance Bill to include: a. Promoting fiscal equity by mitigating instances of regressive taxation; b. Reforming domestic tax laws to align with global best practices; c. Introducing tax incentives for investments in infrastructure and capital markets; d. Supporting Micro, Small and Medium-sized businesses in line with our Ease of Doing Business Reforms; and e. Raising Revenues for Government.

By presenting the Budget on Tuesday, the Federal Government expects a return to the January to December Budget cycle.

Last year, Budget 2019 was presented in December 19, but was not passed and signed into law until April.

He highlighted that the International Monetary Fund (IMF) expects global economic recovery to slow down from 3.6 per cent in 2018 to 3.5 per cent in 2020, which reflects uncertainties arising from security and trade tensions with attendant implications on commodity price volatility.

The President said that he is pleased to report that the Nigerian economy thus far has recorded nine consecutive quarters of GDP growth.

According to him, the foreign exchange market has also remained stable due to the effective implementation of the Central Bank’s interventions to restore liquidity, improve access and discourage currency speculation.

The President said that special windows were created that enabled small businesses, investors and importers in priority economic sectors to have timely access to foreign exchange.

He noted that, as a sign of increased investor confidence in the Nigerian economy, there were remarkable inflows of foreign capital in the second quarter of 2019.

He said that the total value of capital imported into Nigeria increased from US$12 billion in the first half year of 2018 to US$14 billion for the same period in 2019.

On the performance of the 2019 budget, President Buhari recalled that the 2019 ‘Budget of Continuity’ was based on a benchmark oil price of US$60 per barrel, oil production of 2.3 mbpd, and an exchange rate of N305 to the United States Dollar.

He noted that, based on parameters, the Federal Government projected a deficit of N1.918 trillion or 1.37 per cent of Gross Domestic Product.

According to him: “As at June 2019, Federal Government’s actual aggregate revenue (excluding Government-Owned Enterprises) was N2.04 trillion. This revenue performance is only 58 per cent of the 2019 Budget’s target due to the underperformance of both oil and non-oil revenue sources. Specifically, oil revenues were below target by 49 per cent as at June 2019. This reflects the lower-than-projected oil production, deductions for cost under-recovery on supply of premium motor spirit (PMS), as well as higher expenditures on pipeline security/maintenance and Frontier exploration.”

Specifically, Section 46 of the Finance Bill, 2019 expands the exempt items to include the following: a. Brown and white bread; b. Cereals, including maize, rice, wheat, millet, barley and sorghum; c. Fish of all kinds; d. Flour and starch meals; e. Fruits, nuts, pulses and vegetables of various kinds; f. Roots such as yam, cocoyam, sweet and Irish potatoes; g. Meat and poultry products including eggs; h. Milk; i. Salt and herbs of various kinds; and j. Natural water and table water.

“The increasing share of non-oil revenues underscores our confidence in our revenue diversification strategies, going forward. Furthermore, in our efforts to enhance transparency and accountability, we shall continue our strict implementation of Treasury Single Account (TSA) to capture the domiciliary accounts in our foreign missions and those linked to Government Owned Enterprises.”

President Buhari said that the Federal Government increased the budgetary allocation to the National Human Rights Commission from N1.5 billion to N2.5 billion.

He noted that the 67 percent increase in funding was done to enable the Commission to perform its functions more effectively.

On recurrent expenditure, he said: “The non-debt recurrent expenditure includes N3.6 trillion for personnel and pension costs, an increase of N620.28 billion over 2019. This increase reflects the new minimum wage as well as our proposals to improve remuneration and welfare of our Police and Armed Forces. You will all agree that good governance, inclusive growth and Collective prosperity can only be sustained in an environment of peace and security.”

The country’s fiscal reforms, he said: “shall introduce new performance management frameworks to regulate the cost to revenue ratios for Government Owned Enterprises, which shall come under significant scrutiny.”

The government, he added, will reward exceptional revenue and cost management performance, while severe consequences will attend failures to achieve agreed revenue targets.

On managing personnel costs, the President said that he had directed “the stoppage of the salary of any Federal Government staff that is not captured on the Integrated Payroll and Personnel Information System (IPPIS) platform by the end of October 2019.”

He said that all agencies must obtain the necessary approvals before embarking on any fresh recruitment and any contraventions of these directives shall attract severe sanctions.

He added: “Although the 2020 capital budget is N721.33 billion (or 23 percent) lower than the 2019 budget provision of N3.18 trillion, it is still higher than the actual and projected capital expenditure outturns for both the 2018 and 2019 fiscal years, respectively. However, at 24 percent of aggregate projected expenditure, the 2020 provision falls significantly short of the 30 percent target in the Economic Recovery and Growth Plan (ERGP) 2017-2020.

“Accordingly, we have rolled over capital projects that are not likely to be fully funded by the end of 2019 into the 2020 Budget. We are aware that the National Assembly shares our view that these projects should be prioritised and given adequate funding in the 2020 Appropriation Act.”

The President commended the Nineth National Assembly’s firm commitment to stop the unnecessary cycle of delayed annual budgets and expressed confidence that with the country’s renewed partnership, the deliberations on the 2020 Budget shall be completed before the end of 2019 so that the Appropriation Act would come into effect by the 1st of January.

On debt service, he said: “Nigeria remains committed to meeting its debt service obligations. Accordingly, we provided the sum of N2.45 trillion for debt service. Of this amount, 71 percent is to service domestic debt which accounts for about 68 percent of the total debt. The sum of N296 billion is provided for the Sinking Fund to retire maturing bonds issued to local contractors.

“I am confident that our aggressive and re-energised revenue drive will maintain debt-revenue ratio at acceptable and manageable levels. We will also continue to be innovative in our borrowings by using instruments such as Sukuk, Green Bonds and Diaspora Bonds.”

On Social Investment Programme, he said that government would be committed to ensuring the equitable sharing of economic prosperity.

“Our focus on inclusive growth and shared prosperity underscores our keen interest in catering for the poor and most vulnerable. Accordingly, we are revamping and improving the implementation of the National Social Investment Programme through the newly created Ministry of Humanitarian Affairs, Disaster Management and Social Development,” Buhari said.