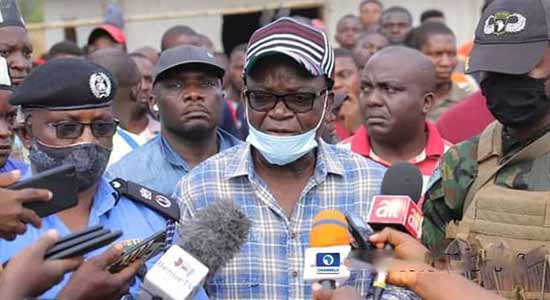 No fewer than 120 security personnel were killed in the line of duty while working in Benue State between 2017 till date.

Governor Ortom disclosed that his government was ready to give financial support to families of the security personnel who were killed in the line of duty.

He stated this on Sunday during an interdenominational thanksgiving service to mark the 2022 Armed Forces Remembrance Day organised by the Christian Association of Nigeria (CAN) in conjunction with Benue State Government.

Ortom explained that the family members of each security personnel will be supported with N500,000 each to cushion the effect of the absence of their breadwinners.

He charged Benue people not to be hostile towards security personnel posted to the state and urged them to lend support and assist them whenever the need arises.

The governor also pledged the state government’s continued support to all the security formations in the state for the effective discharge of their duties.

He however regretted the killing of military men in Konshisha local government last year and prayed that such a thing never happens again in any part of the state, pointing out that the sacrifices security agents make in protecting lives and property should be acknowledged at all times.

The governor urged Christians to continue to pray for leaders in the country for divine direction, stressing that the hearts of kings are in the hands of God and He alone can direct what they can do.

In a sermon on the topic: “Profitable Remembrance,” Pastor in Charge of the Redeemed Christian Church of God, (RCCG), Pastor Aderemi Folasayo, acknowledged the unique role men and officers of the armed forces offer to the nation, stressing that their sacrifices will never be forgotten.

He charged Nigerian leaders to be genuinely concerned about the search for a lasting solution to Nigeria’s challenges, stressing that the sanctity of human lives must be of paramount concern to all.

The State Chairman of CAN, Reverend Akpen Leva pledged the support of the Church in Benue to the Armed Forces for God to give them the strength to continue to protect the people of the state and Nigeria at large.