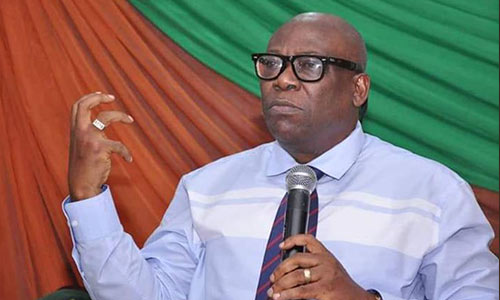 Veteran journalist and lawyer, Richard Akinola and a political group have faulted Femi Falana, SAN over comments that the Nigerian Bar Association (NBA) should discipline all lawyers in the Buhari administration because of the desecration of the law courts by officers of the DSS on Friday at a Federal High Court in Abuja, Vanguard report

In his reaction on Saturday, Mr Akinola said, “With the greatest respect to my good friend, Femi Falana, SAN, l beg to disagree with him in respect of his statement in respect of the Vice president on the Sowore saga.

“It’s necessary to put things in proper perspective. There is only ONE presidency. By my understanding, the VP cannot be issuing statements on an issue when there is a sitting president.

He added that, “Recall that when Osinbajo was acting as president and similar incident happened at the National Assembly, he took action. The invasion of NASS started at about 7am and by 10.30 am, Lawal Daura had been fired as the DG of DSS.

Similarly, the Initiative to Save Democracy (ISD) described as mischievous the comments credited to Mr. Falana.

In a press statement signed by Peter Oladele, Publicity Secretary of ISD, the group said the lawyers in the Buhari administration have not acted in any unprofessional capacity to warrant any disciplinary action.

Besides, the group noted that regarding the Vice President, in particular, it is an unrealistic expectation to require him to respond officially on the misconduct of the DSS agents because the executive powers of the Federal Government are vested only in the person of the President not the Vice President or the lawyers in the Cabinet.

“Besides the President who has the Executive powers in the 1999 Nigerian Constitution as Amended, the only person who has responsibility on this matter is the Attorney-General of the Federation,” the group explained, adding “these facts are well known to Mr. Falana.”

The Initiative to Save Democracy (ISD) also recalled that while the VP was acting for President Buhari and the DSS invaded the National Assembly, Prof Osinbajo acted in defense of rule of law and democracy in the country by removing the head of the organization and condemning the invasion.

ISD then asked “why does Mr. Falana now think the VP or the lawyers in the cabinet could not advise the President to act in a similar way, after all it is the same Buhari Presidency?

“Mr Falana is a Senior Advocate of Nigeria and he should know that Section 11 of the NBA’s Legal Practitioners Act has specific penalties for unprofessional conduct and there is no provision for disciplining lawyers for the actions of other people,” the group said.

“So how do you call for disciplinary actions against colleagues who have not acted in any unprofessional capacity or have not breached the rules of professional conduct,” the group quizzed.

The group then advised Mr Falana to rid himself of any emotional outbursts that could overshadow what is otherwise a noble work he is doing on the Sowore matter, stressing that, as a senior lawyer he should know who has what powers and where the buck stops in a Presidential system of government such as Nigeria is currently practising.

“As a group we have condemned the actions of the DSS and have called for the immediate release of Mr Sowore because the court has ordered his release. We also condemn the re-arrest of Mr Sowore by the DSS it only puts Nigeria in bad light. And we should not use these unfortunate incidents to dent the image of lawyers in the Buhari cabinet.”

Dele Adesina, SAN, Is A Bridge Builder Within In The Legal...