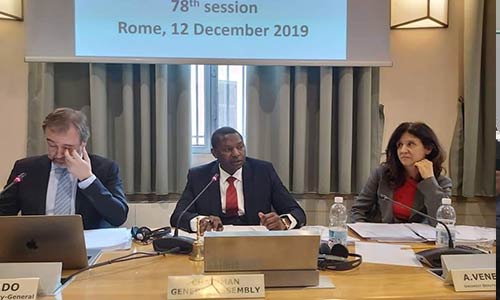 The Attorney-General of the Federation and Minister of Justice, Abubakar Malami (SAN) has been unanimously elected as the Chairman of the 78th session of the General Assembly of the International Institute for the Unification of Private Law (UNIDROIT), an international organization that seeks to harmonize international private laws across 63 member countries.

The election which took place at the 78th General Assembly Meeting held on Thursday in Rome, Italy followed the proposal by four counties; South Africa, Egypt, Australia and Spain that Malami is elected to chair the Assembly of the state parties.

The nomination was unanimously supported by the General Assembly of member states including United State of America, United Kingdom, Germany, France and Canada.

A statement by the Special Assistant on Media and Public Relations to the AGF, D. Umar Jibrilu Gwandu made available to newsmen in Abuja on Friday said, shortly before the election, the Chair of the General Secretary (2018-2019), Paul Duhr, Ambassador of Luxembourg to Italy noted that the post of Chair of the General Assembly has traditionally rotated among the four geographical regions of UNIDROIT pursuant to the Article 7(7) of the UNIDROIT regulations.

Addressing the Assembly as the newly elected Chair, Malami noted that Nigeria has been an active participant member of UNIDROIT since 1964.

The AGF, who described Nigeria as a major global commercial player in the African continent said the country is “Africa’s largest economy and projected to be among the top 20 economies by 2050”.

He recalled that a former AGF Michael Aondoaka (SAN) was elected for a five-year term (2008-2013) to the UNIDROIT Governing Council, adding that with Nigeria’s advancement in areas such as telecommunication and e-commerce, the country has taken a greater interest in the emerging global legal architecture being developed by UNIDROIT.

As the Chairman, Malami resolved commitment to boosting the activities of UNIDROIT during his tenure as the Chairman and work assiduously towards ensuring the “entry into force of the Protocol to the Cape Town Convention on matters specific to Mining, Agriculture and Construction of Equipment (MAC Protocol) the text of which was recently adopted at the diplomatic conference held in Pretoria, South
Africa November 2019”.

Malami expressed determination to ensure full implementation of the recently adopted compensation and social security reforms, together with possible further improvements to UNIDROIT’s Regulations and its overall administrational framework.

It could be recalled that the Minister was at one time President of International Anti-Corruption Academy and Member International Court of Arbitration. 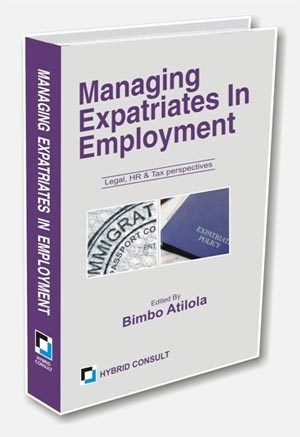 **ABOUT THE BOOK** The book is a complete reference work and a practitioner’s guide on managing expatriates. The first of its kind in Nigeria. For enquiries and order please contact: HYBRID CONSULT, Tel: 08066192650, 08033739869, info@hybridconsults.com, hybridconsult@yahoo.com