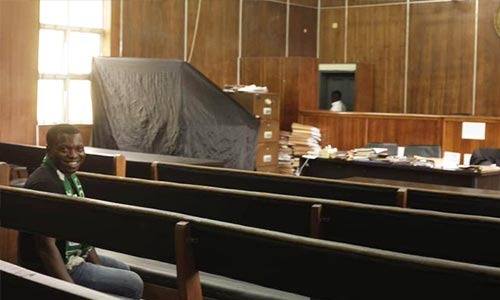 Simon Amobeda, a judge of the federal high court in Calabar, Cross River state, says the life of Agba Jalingo, a journalist, is in the hands of the court, TheCable report.

Jalingo, publisher of CrossRiverWatch, a local publication, was arrested and charged with treason after some critical social media posts on Benedict Ayade, governor of Cross River.

He was first arraigned in court in August. When he appeared in court on Tuesday, Amobeda adjourned the trial till Wednesday.

However, he was heard saying critical things about Jalingo and Adeyinka Olumide-Fusika, his counsel.

In a leaked audio, the judge accused Olumide-Fusika of being too proud, saying he would not be intimidated by the senior advocate of Nigeria (SAN).

“I told the young man (Jalingo) yesterday, your life now is in the hands of the court,” the judge said.

On Adeyinka Olumide-Fusika, Amobeda said: “In the three times he appeared before the court, the first time he was to bring down the court, the second time he was gentle, the third time yesterday, he was shouting on top of his voice. I refuse to be intimidated.”

The judge said the trial would go on whether or not the defence counsel chooses to withdraw.

Citing the case of Ken Saro-Wiwa, he said: “Late Gani Fawehinmi walked out on the tribunal in Ogoni matter. What happened? The matter went on and Ken Saro-Wiwa was convicted and sentenced to death.”

The judge also said the defence counsel accused him of conniving with the prosecution, adding that recently, he got a letter of threat over the trial.

He said the name and address of the writer was included in the letter.

He is standing trial on charges bordering on conspiracy, terrorism, treasonable felony and attempt to topple the government of Cross River.