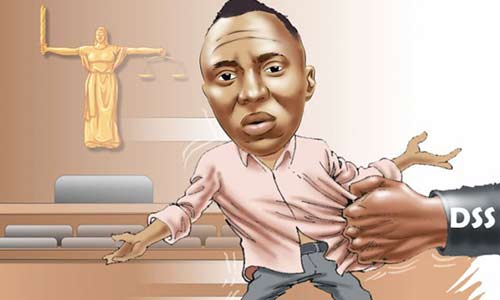 With the brazen invasion on Friday of a Federal High Court in Abuja by hooded men of the Directorate of State Services (DSS), the basic symptoms of incipient fascism are becoming manifest in Nigeria. The harassment of a sitting judge and the abduction from the court room of a citizen smell of a creeping authoritarianism. Not even under the worst military dictatorships did our country descend so low. Viewed within the context of habitual disobedience to court orders by the current administration, Nigerians have cause to worry as arrogance of power is fast becoming a substitute for governance.

To the extent that the system of government that we practice does not allow the person at the helm the luxury of ignorance in matters of grave national security, President Muhammadu Buhari must take responsibility for what happened inside the Federal High Court on Friday. For a leader who has benefited greatly from democracy despite his unedifying background as a military leader, Nigerians expect from this president a higher level of commitment to the rule of law and respect for the principles of separation of powers.

The crude abduction of Omoyele Sowore within the precincts of the court is only an additional symbolic episode on the continuing violations of the critical institutions of state. The invasion last year of the National Assembly by hooded goons of the same DSS, the plot to gag the social media and condemn citizens to death for speaking to the prevalent hate generated by a divisive government, the continued disobedience to court orders, etc., are the footprints of an autocracy hurrying to take root. But the sordid episode that seeks to emasculate the judiciary points to the clearest danger. Armed goons invading a court in session cannot be at the service of a free society. More seriously, the deployment of security agents to pursue regime specific agenda belongs to the realm of flagrant abuse of office. The hallmark of every banana republic is the privatisation of security institutions to serve the individual agenda of the autocrat at the pinnacle of state power.

In a recent statement on the conduct of the DSS regarding Sowore’s continued detention, Nobel Laureate, Prof. Wole Soyinka lamented that there is a “mission to enthrone a pattern of conduct that openly scoffs at the role of the judiciary in national life” and “a steady entrenchment of the cult of impunity in the dealings of state with the citizenry – both individuals and organizations”. He, however, warns of the consequences of such action even when there is no sign that the authorities care. What is more worrisome is that, apparently taking a cue from the federal government, some governors have also started circumscribing the rights of citizens with the arrest of those who criticise them who are then incarcerated for weeks before being charged to court in their states for terrorism.

To worsen matters, political office holders who swore to uphold the law now pick and choose which court order to obey and which ones to ignore. This bodes ill for our democracy. Even under colonial and military regimes, the country was governed by ordinances or decrees which the rulers were compelled to obey. Whenever there was a material departure from such laws, the courts never hesitated to call public officers to order. But at no time in the history of Nigeria has any government openly justified disobedience of court orders under the pretext of defending national security, as it has become the norm under President Buhari.

By the tenets and letters of the 1999 Constitution of the Federal Republic of Nigeria (as amended), government, at all levels, shall be administered on the basis of the rule of law. In addition, all authorities and persons shall obey the valid and subsisting orders of courts. When the most fundamental element and requirement of democracy, which is the rule of law, is thrashed, we all have no recourse against the tyrant’s jackboots. And when you remove freedom from democracy, all that remains is a political shell with rituals. That’s why all democratic forces should join hands to resist the egregious erosion of freedom and justice in Nigeria. Before it is too late!

Quote
By the tenets and letters of the 1999 Constitution of the Federal Republic of Nigeria (as amended), government, at all levels, shall be administered on the basis of the rule of law