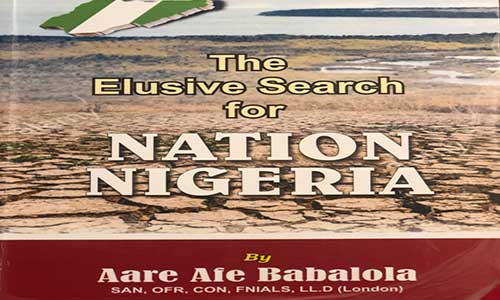 FRONTLINE legal icon, Educationist and Founder & Chancellor of Afe Babalola University, Ado-Ekiti, ABUAD, Aare Afe Babalola, SAN, has taken his vociferous call for the restructuring of the country a notch higher by releasing into the market a 343-page book titled The Elusive Search for Nation Nigeria.

The thoroughly researched and well-crafted book was one of the six launched during the just concluded 10th Anniversary and 7th Convocation ceremonies of the university which were attended by the crème-de-la-crème of the society made up of members of the Bar and Bench, royalty like the Sultan of Sokoto, His Eminence, Muhammadu Sa’ad Abubakar III, the Obi of Onitsha, His Royal Majesty, Igwe Alfred Nnaemeka Achebe (Agbogidi) and the host oba, His Royal Majesty, Oba Rufus Adeyemo Aladesanmi III, the Ewi of Ado Ekiti, clergy like the Catholic Bishop of Ekiti, Bishop Felix Ajakaiye and captains of industry like Prof. Anthony Adegbulugbe, a Serial Entrepreneur and Energy Expert as well as top politicians like the APC National Leader, Asiwaju Bola Ahmed Tinubu who came with six state governors.

Reviewing the Elusive Search for Nation Nigeria, ABUAD’s Deputy Vice Chancellor, Academic, Innovation and External Linkages, Prof. Damilola S. Olawuyi, posited that the book could not have come at a better time bearing in mind that all things considered,  “there is no gainsaying the fact that Nigeria is currently at political, economic, social and developmental crossroads”.

Olawuyi corroborated his position by saying that: “Poverty is at an alarming rate, several of our roads, electricity, water, aviation and other infrastructures are time-worn, our educational systems are nose-diving, religious and ethnic intolerance are surging; criminality, insecurity, terrorism and kidnappings are at alarming levels. The future of the Nation has never been so uncertain.”

He added: “Due to the complexity and multifaceted nature of the various issues, several of the existing studies have unpacked the problems from sectorial, one-discipline-at a time standpoints which has not provided a robust, comprehensive and interdisciplinary understanding of the history, sources, causes and solutions to Nigeria’s current socio-political challenges.

Having taught law as a Professor of Law in Africa, Asia, Europe, North America and the Middle East, the lawyer in Professor Olawuyi took over when he quipped that “I cannot resist the urge of labelling this book as a complete Encyclopedia of Constitutional Law and Comparative Global Politics. The book provides the first comprehensive, authoritative, multi-sectoral and multi-dimensional examination of the history, nature, causes and potential solutions to the constitutional and existential challenges facing the Nigerian nation.

“The book is like an onion, each layer is filled with limitless value.  Well contextualized in history, anthropology, law, economics, political philosophy, government, international affairs, environmental science, agriculture, and food science, this is not an ordinary book. It is a revolutionary compendium of facts, figures, analyses and exceptional insights on the foundations and inherent challenges facing Nigeria’s attempt to form a cohesive nation out of the hundreds of nations which inhabit the geographical enclave called Nigeria” Olawuyi added.

After whetting the appetite of the audience with the lucid contents of Chapters 1 and 2 of the book which provide analytical examination of the meaning of nation, nationhood and nationalism and after digging deep into the other eight chapters of which deals with abandonment of agriculture, how poor funding has impoverished our education, Nigeria’s wavering economy and insecurity and wanton disregard for fundamental human rights, Olawuyi came up with the unassailable facts that the book is a must read for everyone across all professions: students, academics, researchers, administrators, lawyers, economists, farmers, judges, advocates and civil society. 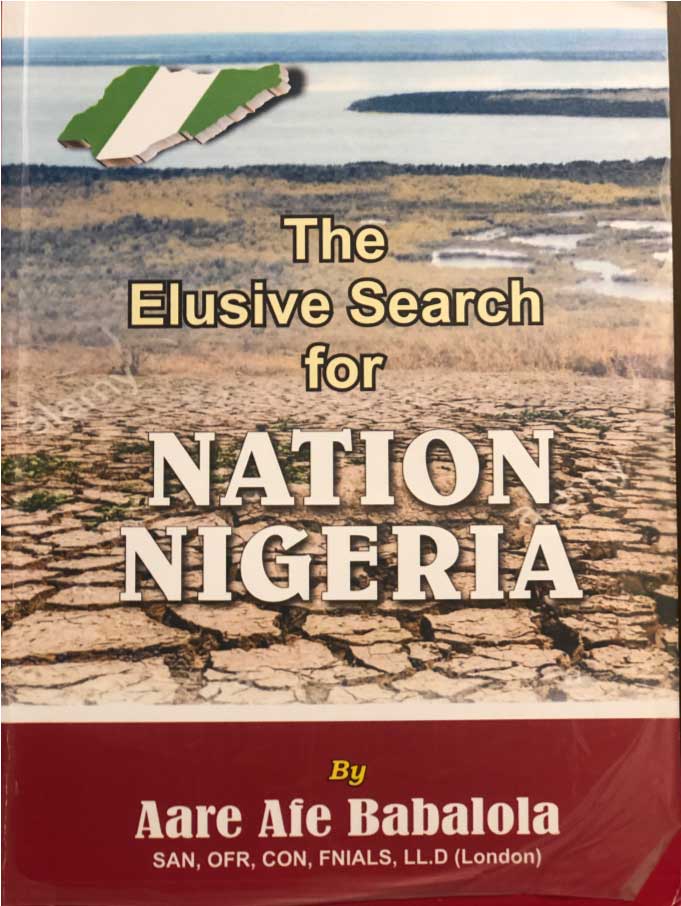 Olawuyi commended the author, a distinguished oracle and statesman, for providing the first comprehensive and authoritative Manifesto for Transformational Leadership, stressing that the 10 principles of transformational leadership in this chapter provide penetrating and thought provoking guidelines that should naturally be adopted by any progressive, forward thinking and well-meaning political party and politician in Nigeria and Africa.

In the opinion of the author, Aare Afe Babalola, “Anyone seeking elective office that is not ready to uphold and commit to these 10 principles of transformational leadership and a robust restructuring process is a hazard to the nation and should be condemned to electoral failure.

For Nigeria to know peace and move forward, the concluding chapter of the book emphasizes the place of political restructuring, through an immediate sovereign national conference. Rather than another round of constitutional or national dialogues and conferences, the author called for an immediate Sovereign National Conference, made up of two to three delegates per state, elected on a zero party basis, and other distinguished personalities from diverse backgrounds. He called on all Nigerians to wake up, speak up and act in the best interest of Nigeria’s rebirth by consistently making restructuring and SNC the crux of the next election cycles in this country.

According the Author (Babalola), the book is compendium of his thoughts on how a nation can emerge from the hundreds of nations which inhabit the enclave now known as Nigeria, a country that was carved out by Europeans in 1884 in Berlin without their consent.

Babalola who has been in the last 60 years in the  rested Sketch, the Nigerian Tribune and the Vanguard on the making of a nation and has also delivered numerous lectures on the issue said the  book is a tribute to all his readers and admirers particularly those who have urged him to put his writings in a book form.

He added that it is also a testament to the founding fathers of Nigeria whose deliberations particularly in London gave birth to the 1960 Federal Constitution which was intended to promote a prosperous and autonomous state that would metamorphose into a prosperous one nation.

According to him, the book is also a legacy for those coming after the present generation of Nigerians that all hopes are not lost and that indeed, there were some Nigerians who did not keep their tongue within their cheeks on the inappropriateness of the 1999 constitution for over 300 ethnic groups who hitherto had little or nothing in common.

Babalola pointed out that the book  exposes the contemporary threats  to the unity of Nigeria by the near absolute power of the Federal Government under the 1999 Constitution which include but not limited to unprecedented level of unemployment, insecurity, economic instability, very poor electricity supply, environmental degradation, poor infrastructure, kidnapping, bank robbery, Boko Haram, poor policing, hunger, public fear, wanton disregard for the rule of law and of course weak and unproductive states and local governments.

The book offers solutions on how a people’s constitution can replace the existing constitution. Finally, Babalola is of the view that a Sovereign National Conference, SNC, is the answer and not a mere amendment to the 1999 Constitution which is in reality a Unitary Constitution.