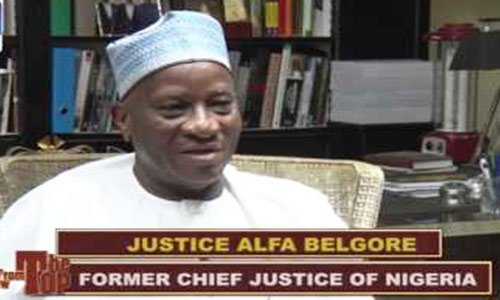 THE Code of Conduct Bureau (CCB) has received a petition on former Chief of Justice of Nigeria Alfa Belgore, TheNation reports.

Belgore was accused of testifying against the country in favour of Process and Industrial Developments (P&ID), which secured a $9.6b arbitral award against Nigeria.

The petition was filed by Human and Environmental Development Agenda (HEDA), whose Chairman, Comrade Suraj Olanrewaju, was invited by the CCB to adopt the petition on oath.

The CCB demanded evidence of any alleged infraction that might have been committed by Justice Belgore from HEDA.

The group accused Belgore of alleged conflict of interest and violation of Section 5 of the Code of Conduct for Public Officers of the 1999 Constitution.

It added: “Based on the foregoing, it is succinct to point out the basis for this petition. From the above relayed, there is a clear case of conflict of interest which is backed up constitutionally by the Code of Conduct for Public Officers. Specifically, Section 1 of the Code of Conduct for Public Officers which states that a public officer shall not put himself in a position where his personal interest conflicts with his duties and responsibilities.

“Section 5 of the Code of Conduct for Public Officers of the 1999 Constitution goes further and directly prohibits former presidents, vice presidents, Chief Justices of Nigeria, governors and Deputy Governors from working for foreign companies or enterprises. The former CJN falls under this category and also is still the chairman of the National Merit Honour Award Committee, which confers him with a sense of patriotism and loyalty to the country.

“It can be concluded, without equivocation, that drafters of the Constitution understand the weight of the offices occupied by the prohibited officers and the potential implication of actions such as that taken by the former CJN.

“The act he allegedly committed is grave and amounts to a breach of the Code of Conduct for Public Officers, thereby violating the provisions of the Constitution.

“By accepting the contract from P&ID and proffering the expert advice for the Irish company for a fee, the former CJN violated the provisions of the Constitution and also exposes privileged and sensitive national information to foreign private company. Also, he ran contrary to this provision by also accepting the appointment as the chairman of Airtel Nigeria.”

HEDA urged the CCB to investigate and prosecute Belgore if he is found guilty of violating Section 5 of the Code of Conduct for Public Officers.

It said: “We most humbly believe that the former CJN, by this act, runs foul of the Constitution in the circumstances of the Section 23 (1) & (2) of the Code of Conduct for Public Officers of the 1999 Constitution, which provides that the tribunal has the powers to impose punishment.

“(1) Where the Tribunal finds a public officer guilty of contravening any of the provisions of this Act, it shall impose upon that officer any of the punishments specified under subsection (2) of this section.

(2) The punishment which the Tribunal may impose shall include any of the following (a) vacation of office or any elective or nominated office, as the case may be;

(b) disqualification from holding any public office (whether elective or not) for a period not exceeding ten years; and

(c) seizure and forfeiture to the State of any property acquired in abuse or corruption of office”.

“Based on the above stated provisions, we hereby demand the following:

That Belgore should be investigated and prosecuted immediately for violating Section 5 of the Code of Conduct for Public Officers.

That as a result of this breach and upon conviction, the former CJN be removed with immediate effect as Chairman of the National Merit Honour Committee

“Our demand is hinged on our resilient and persistent demand for democracy, accountability, transparency and ultimately preservation of the rule of law.”

Belgore is undergoing a separate investigation by the Economic and Financial Crimes Commission (EFCC) over his alleged roles in the judgment against Nigeria.

The anti-graft commission is looking into alleged criminal conspiracy trailing the arbitral award.

Confirming receipt of the petition against Belgore, the Chairman of CCB, Prof. Muhammed Isah, said: “We got a petition from HEDA but in line with our procedures, we asked the chairman of the group to come and adopt it.

“We have also directed HEDA to provide evidence against the ex-CJN upon which we can take further action. We are awaiting evidence from the petitioner.”

In the 30th September, 2019 petition, signed by Suraj Olanrewaju, HEDA said it based its petition on a report on the purported testimony for P&ID before an arbitration tribunal.

The group said: “The report confirmed that the former Chief Justice of Nigeria between 2006 and 2008, Justice Alfa Belgore(rtd) is still a member of the National Council of State and Chairman of the Nigerian National Honours Award Committee.

“He was allegedly reported to have testified as an expert witness before an arbitration tribunal in the UK’s Business & Property Courts, for an Irish Firm, P&ID.”