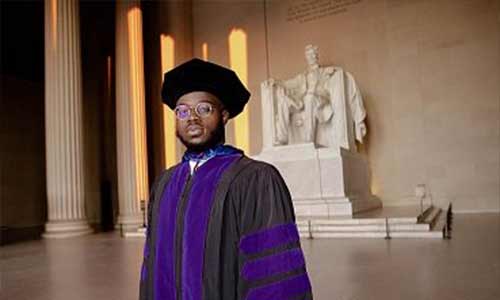 An Indigene of Ekiti State, Dr. Damilola Arowolaju, has bagged a PhD in Law from The George Washington University, Washington DC, United States of America.

Damilola who hails from Omuo Ekiti, in Ekiti East Local Government area of Ekiti State is the son of a former Special Adviser to Governor Segun Oni on Due Process, Dr. Bayo Arowolaju

He was decorated with the honour at the university’s virtual convocation ceremonies held on Thursday, May 21, 2020.

Damilola was also the President of the 2020 PhD graduating students, which further made his honour more grandiose.

The former Special Adviser who confirmed this to journalists in Ado Ekiti on Saturday, was elated that his son could be decorated with such a high academic honour at the age he secured admission to the University of Lagos , where he studied Sociology.

He said: “My baby, Dr. Damilola Arowolaju, with the grace of God just graduated with a PhD in Law from The George Washington University School of Law, Washington DC, USA.

“He gave an address to the fellow graduands as the President of the GW Bar Association. Graciously, he did this at 24 years of age, when I was just entering the University in Nigeria for my first degree. May our children be higher and be more successful than us all. Amen

“I am overwhelmed, speechless and flabbergasted by this outstanding feat. I am excited and more motivated to do more to uplift humanity”.

Arowolaju appealed to the Ekiti State Governor, Dr. Kayode Fayemi to rejig and expand the scope of the State’s scholarship board to be able to benefit the children of the poor, who are outstanding in their academics .

In a video clip containing his speech to the graduand, Damilola said he shall continue to promote justice for all manners of men, irrespective of creed , race and class.

The young academic added that no sacrifice is too much to make to protect human rights and promote self respect among humanity, describing these as the best way to entrench equality in the system .

“Justice means making huge sacrifices that would guarantee all constitutional freedoms for all and sundry.

“When I say justice, I mean for both innocent and guilts. The one that brings equality, stability and raise the hope for a better society. That is what we should all pursue using morality and the instrumentality of Law.

“My graduation today was a result of the sacrifices made by my parents to ensure that I excel in my academic pursuit”, he said.