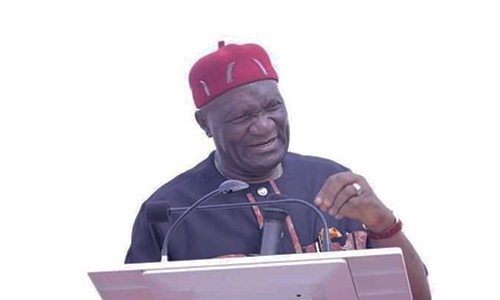 Former President General of the Pan-Igbo socio-cultural organisation, Ohanaeze Ndigbo, Chief John Nnia Nwodo, has declared that the posturing of Delta State Governor and the Vice presidential candidate of the Peoples Democratic Party (PDP), Ifeanyi Okowa, of being an Igbo and his quest to reap the political benefit therefrom was deceitful and self serving.

Nwodo revealed that Okowa never paid the monthly dues of his state for the running of Ohanaeze Ndigbo.

The former minister for information made the disclosure, while featuring as the keynote speaker at Ikengaonline monthly Town Hall meeting on Thursday. Ikengaonline is a South-East-focused media platform, which aims at giving voice to the citizens of the South-East, and parts of Rivers and Delta states, and highlight the challenges facing the region.

Nwodo, who spoke through zoom, regretted that despite several efforts made by the leadership of Ohanaeze under his watch to persuade Okowa to patronise Ohanaeze, the Delta Governor bluntly refused.

Nwodo said that instead of paying up the monthly subscription for his state, Gov. Okowa told him that Delta is a heterogeneous state, arguing that there was no way he should be expected to fund an Igbo organisation.

The former Ohanaeze boss expressed surprise at Okowa’s recent claims that he is a bonafide Igbo whereas he refused to identify with the apex Igbo socio-cultural organisation as a sitting Governor.