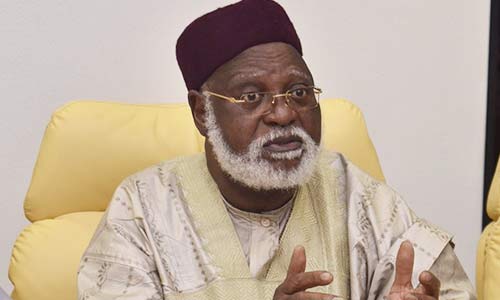 *Says “I Have Endorsed All The 2023 Presidential Election Candidates”

A Former Military Head of State, General Abdulsalami Abubakar has shared his expressed his endorsement for all Presidential Candidates who have visited him and sought his counsel in the buildup to the Presidential campaigns for the 2023 General elections.

He said this while sharing his thoughts on the current political climate in Nigeria, as well as sundry issues affecting the country in an interview with Leadership.

Speaking on the involvement of youths in the 2023 elections, Abdulsalami admitted that it quite challenging for youths to wrestle power with the older generation, and stated that we should be doing better than where we are today.

He however expressed optimism that the 2023 elections will be about ideals.

“Indeed, we should be doing better than what we are doing today. Politics especially in developing countries and indeed in all over is now becoming a matter of resources. Unfortunately, the younger generation have not gotten as much resources as the older generation who have been in politics.

This is one of the challenges the younger generation are facing but hopefully with the birth of social media and technology, I think a lot can be done in order to disabuse the minds of people to play politics well. I think with technology, the politics of this year should be about ideals. So, it is a big challenge but you people said the struggle continues. I hope one day we will overcome this phenomenon.”

General Abdulsalami also took hold of the opportunity to endorse all Presidential Candidates in the forthcoming election.

He was asked, “In recent times, you have been seeing a lot of presidential candidates coming into Niger State. Have you in any way endorsed a particular candidate?”
The Retired General reputed for initiating the present democratic dispensation in 1999 said, “Yes, I endorse all of them!”

He also responded to criticisms about the 1999 Constitution which many pundits and commentators have faulted as the bane of the present-day Nigeria.
Abdulsalami retorted that there is no perfect Constitution anywhere in the world, and what matters most is the manner with which the constitution is adhered to.

He noted, “Well, it is not about who wrote the constitution, it is about how it is practiced. There is no constitution in the world that is completely, one hundred percent correct and it is unfortunate that people who participated in drafting the 1999 Constitution are not being appreciated for the work they did. If you look at the 1999 and 1979 Constitutions, there is not too much difference.

He continued, “When we were trying to draw up the 1999 Constitution, Jurists led by late Justice Niki Tobi went round the country to sample opinions on the way forward on the constitution. Thankfully, we were able to give a constitution that has been operational for the last 22 years which has helped the National Assembly to do some amendments and I think it is still going on there. So no matter what Constitution you write, it is more about the way you implement it and the way you respect it.”